Using Vine to Juice Up Your Hospital or Medical Marketing 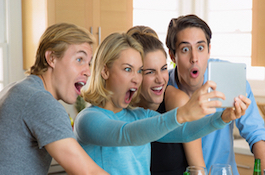 You know Vine. It’s the micro-video-sharing service that hospitals and medical marketing folks can use for visual spice in social networks including Twitter and Facebook. When Vine first emerged many people wondered if there was a useful marketing purpose when confined to creating little looping video clips of less than six seconds. It’s probably the same sort of initial skepticism that questioned Twitter’s 140-character ceiling. Well…surprise! Today—less than four years later and owned by Twitter—Vine is popular with more than 200 million active users monthly. It has the proven ability to communicate via compelling video simplicity that supports healthcare marketing. Helping to fuel this growth:

The nature of Vine allows it to be used most often as a visual bonus to other social platforms rather than a standalone tool. A six-second video loop is an enticing visual splash that invites sharing…and shareability is what makes social tools effective. Think interesting, brief and attention getting. That said, here are some of the ways to use Vine to visually juice up your hospital or medical marketing plan:

Vine is a fast, free and effective video-sharing tool that boosts the impact of social media and medical marketing messages. Although brief, creative and interesting video bits can entertain, educate, inform and engage a visitor. (“Creative and interesting” propels shareability.) Who’s watching? But Vine usage is not evenly distributed across the population. Typical users tend to be younger. The majority of Vine users—about 71 percent—are millennials. About 28 percent of Vine’s adult users are between 18 and 24 and primarily female. However, the more active Vine users also tend to be strong influences among the social media audience. You might think of Vine (and similar video sharing platforms) as a means to gain greater leverage and exposure. Using vine can juice up your hospital or medical marketing plan in social media.

How Can Technology Play a Role in Addiction Treatment?

Your Ultimate Guide to Choosing the Perfect Medicare Plan

5 Health Benefits of Medical Marijuana You May Not Have Known

How Can Technology Play a Role in Addiction Treatment?

Your Ultimate Guide to Choosing the Perfect Medicare Plan