A new and dangerous public health threat has emerged in North America. As yet it is not known how the disease spreads. Outbreaks have been rare, but in the more recent two decades it has taken close to 100 lives in the U.S alone.

It kills swiftly but is not uniformly fatal. It leaves a trail of heartbreak and never ending questions? Those not killed by it’s outbreak ask could we have been immunized against it? How can we find a cure or a treatment ?

What are we writing about here? Mass murders in schools, and public places.

Among the questions asked are;

Can it be predicted and/or prevented?

Why has it become more prevalent?

What are the risk factors?

Is there something wrong with our mental health systems?

Prediction of these events has been a total failure. Forensic psychologists and psychiatrists have elaborated on several personality traits in persons who commit these crimes. They caution however that these traits do not necessarily point to violent behavior.

There may be an explanation (or several) for it’s increase in prevalence.

Questions 2 and 4 may be related.

The development of effective anti-psychotic and other psychotropic drugs to control unacceptable behavior, psychosis, anxiety and depression initiated a paradigm shift in the treatment of mental illness. Prior to 1980 severely and chronically emotionally disturbed people were admitted to either short term or long term psychiatric institutions. Most hospitals had a mental health ward that was secure and locked down. Some were smaller private residential facilities, but the vast majority were large state and/or federally administered facilities.

The institutions were expensive to maintain, and in the new era of ‘effective’ drugs to control aberrant behavior, it was deemed possible to treat more emotionally disturbed people as outpatients once their acute symptoms were controlled. The number of patients needing to be admitted both for short term or long term hospitalization decreased dramatically and gradually most of these in patient facilities closed or were downsized significantly. The ability to admit patients became more difficult.

The stigma of mental illness remains high. People are fearful of what they do not understand. While it is now better understood what causes emotional aberrations, (a chemical imbalance of the brain), only now has neuroscience been able to study the metabolic activity of the brain using metabolic scans coupled with MRI imaging.

Early studies reveal portions of the brain that ‘light up” in emotional and/or physical activity. Studies are in the early phases of identifying behavior with localized activity. As research progresses it is hoped that more specific illnesses will be identified by brain scans.

Will this evolve into predictability of violence or other maladaptation’s to human behavior? Will it become a routine screening test for some personality types? Perhaps the hope may be we can screen for these serious and fatal diseases much like we do now for cystic fibrosis, Tay-Sachs disease, trisomy 21 and other what we know now to be genetically identifiable at early stages.

We must be hopeful.

This particular Sunday most people are thinking, wondering why, also praying for the survivors and the tragic outcome for families, friends and our community. 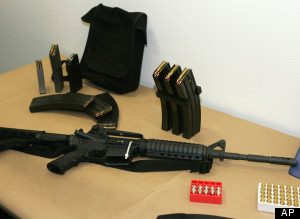 Guns and Violence: A Surgeon Speaks Out

One of the guns used in Newton – A Bushmaster. Not a gun for