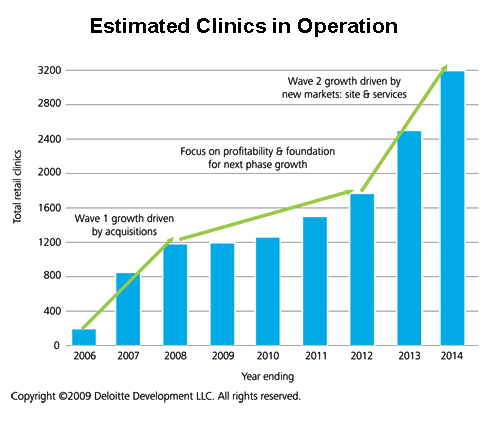 Can Wal-Mart provide us with health care as efficiently as it furnishes us with paper towels?

According to a Kaiser Health News report:

Can Wal-Mart provide us with health care as efficiently as it furnishes us with paper towels?

According to a Kaiser Health News report:

Wal-Mart — the nation’s largest retailer and biggest private employer — now wants to dominate a growing part of the health care market, offering a range of medical services from basic prevention to management of chronic conditions like diabetes and heart disease, according to a document obtained by NPR and Kaiser Health News.

But then the next day, according to Kaiser, the company started backtracking:

The only thing the company would say for certain is: “we are not building a national, integrated, low-cost primary care health care platform,” according to the statement from to John Agwunobi, senior vice president and president of Wal-Mart U.S. Health & Wellness.

I’ll get to what Wal-Mart might be thinking in a minute. First questions first: Can Wal-Mart provide care that is of higher quality and lower cost than conventional provision? If so, how?

My answer: Wal-Mart can indeed improve on the current system. But here’s the catch. It can do so only if it continues doing what it and other retail medical outlets are already doing: ignore the third-party payers. Almost everything that’s wrong with our health care system is the direct result of third-party payment; and some of the most striking examples of efficient care are emerging in those parts of the market where third-party payment is either nonexistent or of marginal importance.

Life insurance, for example, plays a useful social function. But we don’t use life insurance to pay for coffins, caskets and funeral services. There is a lot wrong with the funeral industry. But none of it is caused by life insurance. As I previously wrote in response to a comment by Uwe Reinhardt:

I have life insurance. But when I die, the insurer is not going to pay for my autopsy, my cremation, the urn that will hold my ashes, or the cost of the plane needed to sprinkle my ashes over the Princeton University football field (or some other suitable place). Instead, my wife will get a check.

When insurers become buyers of care instead of insurers of care a number of things begin to change, all of them bad:

Doctor, doctor
Give me the news

Most people (even most health policy experts) have no idea the extent to which third-party payment makes efficient provision of medical care impossible. Here is an excerpt from one of my previous posts:

Misa and his team thought they had the solution: a “concept clinic” that uses doctors for only the most complex cases, and steers most patients to nurse practitioners and physician assistants… Then they did the calculations: What if Park Nicollet had used this model in 2009, when it had about a million total patient visits to primary care; and if everyone had paid Medicare rates?

They discovered that the concept clinic would have run at a 40 percent loss; about the same as the current model… The problem, in part, is that Medicare payments also drop under this kind of model; it pays less for visits with nurse practitioners than doctors. That ate up any savings.

The perverse incentives work both ways. They not only discourage conventional sources of care from becoming efficient, they discourage efficient care givers from accepting patients who rely on third parties to pay their medical bills. As Tom Saving and I wrote in The Wall Street Journal earlier this year, most walk-in clinics won’t accept Medicare enrollees and almost none accept Medicaid enrollees because of their low payment rates. (Yet if Medicare and Medicaid would pay the market price — or allow the patient to pay a “balanced bill” to reach the market price — care would be more accessible for the elderly, the poor and the disabled and the government would save a lot of money in the process!)

Fortunately (at least for efficiency’s sake) a lot of people are paying for a lot of care out of their own pockets or out of medical savings accounts of one sort or another. As a result, there are about 1,300 walk-in clinics nationwide (see the graph below via Sarah Kliff at Ezra Klein’s blog). These include about 140 Wal-Mart clinics, CVS Caremark’s nearly 550 Minute Clinics and Walgreen’s 355 Take Care clinics. All of these clinics post prices; they keep records electronically; most can prescribe electronically; and, according to one study, they provide more reliable care than conventional primary care physician’s offices. [See our previous reports here, here and here.]

So what is Wal-Mart up to? I previously reported that a lot has been going on at Sam’s Club — generally below the health media radar screen. For example, in June they offered the following screenings to male customers at no charge:

And, here’s the schedule they have been following since then:

Wal-Mart is clearly testing the waters.