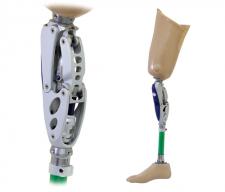 From War to Bionic Legs to Immortality For better or worse, war has provided the impetus for new medical technology. The latest wars in Iraq and Afghanistan have sent home many men and some women who suffered the loss of legs and arms. Although prosthetic limbs have been improving over the years, they are really no substitute for the real thing.

For better or worse, war has provided the impetus for new medical technology. The latest wars in Iraq and Afghanistan have sent home many men and some women who suffered the loss of legs and arms. Although prosthetic limbs have been improving over the years, they are really no substitute for the real thing.

That’s starting to change now, as we learn from an LA Times article about a study published in the New England Journal of Medicine.

A report published Wednesday in the New England Journal of Medicine describes how the team fit [a patient] with a prosthetic leg that has learned — with the help of a computer and some electrodes — to read his intentions from a bundle of nerves that end above his missing knee.

For the roughly 1 million Americans who have lost a leg or part of one due to injury or disease, [the patient] and his robotic leg offer the hope that future prosthetics might return the feel of a natural gait, kicking a soccer ball or climbing into a car without hoisting an inert artificial limb into the vehicle.

[The patient’s] prosthetic is a marvel of 21st century engineering. But it is [the patient’s] ability to control the prosthetic with his thoughts that makes the latest case remarkable. If he wants his artificial toes to curl toward him, or his artificial ankle to shift so he can walk down a ramp, all he has to do is imagine such movements.

This is pretty remarkable stuff, and great news for the many people who have lost limbs and may benefit. But it also hints at ethical issues that society will have to deal with in the future as the technology gets better and better.

We’ve already witnessed the first signs of what’s to come with Oscar Pistorius, the so-called Blade Runner (and probably murderer) whose artificial legs propelled him in the Olympics at a rate that’s likely higher than what he would have been able to do with “real” legs.

Call me crazy (go ahead) but how long will it be until we have athletes who decide to get bionic replacements for legs, knees, arms, eyes –you name it? I think it will be just 20 years or so. After that, we may find a whole cadre of people taking on replacement parts –including internal organs– in order to improve their health and have a shot at something approaching immortality. If you think there’s a wide divide between rich and poor today just wait until the rich find a way to use replacement parts to increase their strength and extend their lifespans.

I hope I won’t be around to see that happen.