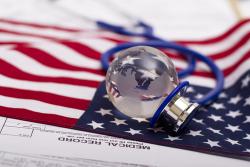 ACA: Why Repeal and Replace Is a Joke Republicans started talking about “repeal and replace” soon after the Affordable Care Act was passed in 2010. The 2010 and 2012 elections have come and gone, the Supreme Court has ruled, and implementation is continuing.

Republicans started talking about “repeal and replace” soon after the Affordable Care Act was passed in 2010. The 2010 and 2012 elections have come and gone, the Supreme Court has ruled, and implementation is continuing. Yet while opponents continue to rail against the law and the House has voted 39 times to repeal it in whole or part, to date there has been no real attempt to “replace” the law with something else.

That’s despite the fact that “replace” is part of the so-called Pledge to America the GOP put in place when it took over control of the House.

An Associated Press article (After 3 years, House Republicans still voting to repeal ‘Obamacare,’ but have no replacement) describes the situation.

Officially, the effort is “in progress” — and has been since Jan. 19, 2011, according to GOP.gov, a leadership-run website.

But internal divisions, disagreement about political tactics and Obama’s 2012 re-election add up to uncertainty over whether Republicans will vote on a plan of their own before the 2014 elections, or if not by then, perhaps before the president leaves office, more than six years after the original promise.

But the problem for Republicans is more fundamental than internal divisions, tactics or even Obama’s election. The real “problem” is that the GOP believes its own propaganda about the law itself and how it was passed. In this view, the Affordable Care Act is an extreme piece of left-wing legislation that was rammed down the throats of the Congress by Democrats without input from the GOP.

In fact, the law is a moderate one that includes many Republican ideas (such as individual responsibility in the form of mandates, exchanges for insurers to compete for business), is conservative in the sense that it leaves the basic mechanisms of the health care system (employer purchase of health insurance, private employment of providers, Medicare, Medicaid) in place, and excludes more radical ideas such as single payer, global budgets, or nationalization of hospitals and physician practices.

The remaining ideas Republicans discuss publicly for “replace” are frankly a joke. Here’s more or less what it amounts to:

“Giving the tax break for health insurance to the employee instead of the employer, medical liability reform, creating high-risk medical ‘pools’ and allowing insurers to sell their products across state lines.”

In the short-term, thanks to gerrymandering, individual Republican House members have done fine in their own districts by taking a strident anti-Obamacare line. But not only is a repeal-only approach bad policy, I think it’s also likely to be bad politics in the long-term. If Obamacare fails  –either due to obstructionism or its own weaknesses– what do opponents think will happen next?

Doing nothing or tinkering around the edges of the system circa 2010 won’t be an answer. If anything, it may reinforce the case for a single payer system and lay the groundwork for true socialism.