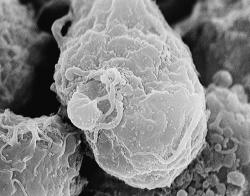 After many years in pursuit, a team of scientists happily achieved their goal: a ‘picture’ detailing the atomic-level structure of the elusive three-part human immunodeficiency virus (HIV) envelope protein.

After many years in pursuit, a team of scientists happily achieved their goal: a ‘picture’ detailing the atomic-level structure of the elusive three-part human immunodeficiency virus (HIV) envelope protein. Considered to be of great value for medical science, their work will help virologists identify the sites an experimental vaccine need mimic in order to elicit a strong response from the body’s immune system. The scientists, who hail from The Scripps Research Institute and Weill Cornell Medical College, published their research online today in Science Express.

Attempts to Create a Vaccine for HIV

The inability to create an effective vaccine for HIV is largely due to the challenges posed by HIV’s envelope protein, known to virologists as Env. Over time, scientists had gathered some knowledge of this protein. Env is not a single, simple protein, but a “trimer.” This trimer is made of three identical, loosely connected structures with a stalk-like subunit, gp41, and a cap-like region, gp120. Scientists also knew Env resembles a mushroom, and a typical virus particle has about 15 Env trimers sprouting from its membrane, ready to latch onto susceptible human cells and facilitate the entry of the virus. In theory, Env is exposed to the immune system, but in practice, it evades immune attacks with the highly effective strategies it has evolved. Env’s outermost “variable loop” regions will mutate, for example, and its surface will become coated with glycans — hard-to-grip sugar molecules.

For some time, it has also been known that the structure of Env is so complex and so delicate that it tends to fall apart upon investigation. For these reasons, most of the prior structural studies of this envelope complex focused on individual subunits. In order to obtain the current, more detailed understanding of Env, the team from Scripps and Weill Cornell understood they would need to engineer a more stable form of Env, one sturdy enough to withstand atomic-resolution imaging. So Drs. John Moore and Rogier W. Sanders and others at Weill Cornell teamed up with Drs. Ian A. Wilson and Andrew Ward and their colleagues at Scripps to produce their own version of the Env trimer. This new version, called BG505 SOSIP.664 gp140, includes all of the trimer structure that normally sits outside the viral membrane. The next step? A closer look.

To add another, finer layer of detail and complexity to their portrait of Env, the researchers viewed it using X-ray crystallography and electron microscopy. They obtained new data, which helped them understand the process by which the Env trimer undergoes radical shape changes during infection. What they saw also clarified how Env compares to envelope proteins on other dangerous viruses, such as flu and Ebola. “The new data … have enabled us to explain many prior observations about HIV in structural terms for the first time,” Dr. Jean-Philippe Julien, a senior research associate at Scripps, stated in a press release.

Having gained new insight, the scientists are now using their new Env trimer to develop vaccines. “We and others are already injecting the trimer into animals to elicit antibodies,” Dr. Ward stated in a press release. “We can look at the antibodies that are generated and if necessary modify the Env trimer structure and try again. We aim to refine and increase the antibody response in the animals and eventually, humans.”