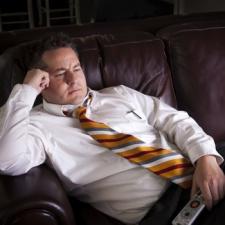 Americans More Sedentary Than Ever A new government study says that Americans are more sedentary than ever, and that includes people who exercise regularly.

A new government study says that Americans are more sedentary than ever, and that includes people who exercise regularly.

According to a Wall Street Journal article, walking a mile roughly equals 2,000 steps. Climbing a flight of stairs—roughly 10 steps—is equivalent to taking 38 steps on level ground.

A study that followed more than 240,000 adults over 8½ years found that watching a large amount of television was associated with a higher risk of death, including from cardiovascular disease—even for participants who reported seven or more hours a week of moderate-to-vigorous exercise.
“Our results suggest that exercise alone may not be enough to eliminate risks associated with too much sitting,” says Charles Matthews, lead author of the study and an investigator with the National Institutes of Health. He says estimates from government surveys indicate that people’s sedentary time outside of work has increased by about 40% between 1965 and 2009.

From the WSJ – All the movements a person does during the day—from getting up to close the garage to rocking in a chair—are non-scheduled physical activities that can make a big difference in terms of daily calorie expenditure by causing a person’s metabolism to increase, says Gabriel Koepp, program manager of the Non-Exercise Activity Thermogenesis (NEAT) laboratory at the Mayo Clinic.

People who use pedometers increase the number of steps taken by an average 2,491 a day and boost overall physical activity by about 27% from previous levels, says Dena Bravata, a senior science affiliate at the Center for Primary Care and Outcomes Research at Stanford University. Participants’ body-mass index, a common measure of healthy weight, and blood pressure also decline, she says.

Perfect example is my mother-in-law when she visits. If she is on the lower level, say the kitchen and has to use the bathroom, instead of using the one on that level, she deliberately walks upstairs and uses the facilities there. It’s all about the constant little exercise. Oh she is 82, in perfect health and on no medications. She could write these studies.