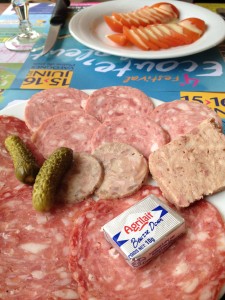 Are Nitrates or Nitrites Bad? Not Really When you see a package of hot dogs saying “Nitrate Free” you probably think that you are doing something healthy for you and your family.  Somewhere you heard vague whispers of nitrates being bad for you, or preserved meats causing cancer. First, rest easy, and second, don’t buy nitrate-free processed meats.

When you see a package of hot dogs saying “Nitrate Free” you probably think that you are doing something healthy for you and your family.  Somewhere you heard vague whispers of nitrates being bad for you, or preserved meats causing cancer. First, rest easy, and second, don’t buy nitrate-free processed meats.

While today people think about at nitrates they often think about processed meats (bacon, hot dogs, antipasta, and other delicious charcuterie). Nitrites are the anti-bacterial agent desired for their anti-bacterial effect on food. But  the highest levels of nitrates/nitrites are found in vegetables.  But what is more fascinating is that the highest levels of nitrates are in human saliva.

Your Body Uses Nitric Oxide Gas to Regulate Blood Vessels
One of the great discoveries in modern biochemistry/physiology is that our body uses nitrates. In fact, it uses nitric oxide, a gas, for regulation of blood pressure, digestion, and to prevent clotting, among other things.

The technical stuff:  Sodium Nitrate is converted to Sodium Nitrite in our digestive system. The biochemistry is that dietary nitrate (NO(3)) and nitrite (NO(2)) are sources for the production of NO(x) which is a group of chemicals the body uses, such as nitric oxide (a gas – yes your body produces gas for some great things),  and others such as nitrosothiols and nitroalkenes.

Dietary nitrates/nitrites, it turns out,  are the building blocks for the material that is beneficial to the heart and blood vessels. Even the mechanism of action of drugs for erectile function, such as Viagra, increase nitric oxide in the vessels of the penis to help develop and maintain an erection. That our body uses nitric oxide to regulate blood vessels would never have been considered before its discovery in the 1990′s.  So where, you might ask, is the controversy about nitrates?

What about Cancer and Nitrates?

There are a number of  potential “carcinogenic” agents in processed meats. Nitrates do not appear to be them, and the entire discussion about processed meats and cancer needs some context. Colon cancer risk increases up to 140 g of processed meat a day, then flattens out. This figure taken from reference 4.

As you can see, the relative risk is real- and statistically it is a real trend, but it is not overwhelming. Look at the chart below. See the Relative Risk numbers for lung cancer as they increase with cigarettes.  These are RR above 5, where the chart above shows RR below 1.5 at its highest. The important point is this: the factors in processed meats, if there are factors that increase cancer risk, are not anywhere near the increased risk of developing lung cancer from tobacco.  Some would argue that with a relative-risk ratio of less than 2, one cannot determine effect. This table shows huge risks of increasing smoking to lung cancer- look at the relative risks from this, vs. processed meats and cancer. – this table from reference 12

The real question is this: is this “trend” from  nitrates/nitrites or some other factor? Is the risk of getting cancer from processed meat   outweighed by the health benefits in maintaining the NO(x) levels needed? Some would note that nitrate-containing foods such as fruits, leafy green vegetables provide enough for the body to maintain NO(x) levels without the risk of colo-rectal cancers from the vegetarian group.

Are Vegetarians More at Risk than Bacon Eaters?
Here is the fun part of population studies. With processed meats the relative risk of colorectal cancer is  mildly elevated, what about vegetarians and nitrates? Turns out they consume more nitrates than people who eat processed meats. But before we make the assumption about vegetarianism, or whole food plant diets, and cancer, we have to look at the real data.  For example, fiber is primarily from vegetable sources, and it is the breakdown of that fiber by bacteria that provide us with chemicals that reduce colo-rectal cancer, one has to wonder if the answer is for meat eaters to increase fiber.  Besides fiber, plants provide  phytochemicals and other micronutrients that are associated with decreasing cancer in the laboratory, as well as in some human studies. Supplements do not provide this support (eat the food, don’t take the supplement). Candied bacon- maybe not a balanced diet, but close

If you are a fan of charcuterie, as I am, know that nitrites are the best way to prevent bacteria, especially botulism. If you buy nitrate -free products, they are at a higher risk. But more important, A balanced diet contains more than just processed meats. Nitrates/nitrites are probably not the issue- if there is an issue. Eat more fruits and vegetables.

(5) Tyrovolas S, Panagiotakos DB. The role of Mediterranean type diet on the development of cancer and cardiovascular disease, in the elderly: a systematic review. J Maturitas. 2009;65(2):122–130.

(12) The graf reproduced from this source: http://www.cancerresearchuk.org/cancer-info/cancerstats/causes/lifestyle/tobacco/tobacco-and-cancer-risk