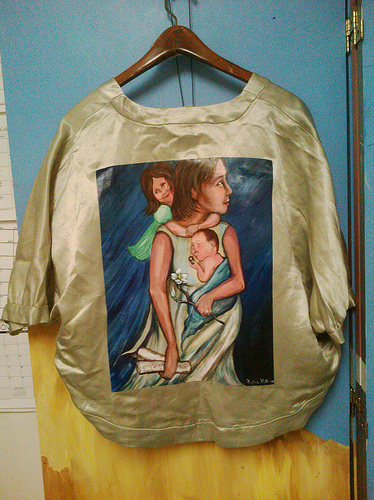 by Regina Holliday 8 min read
Ashes.
They have always been part of our lives.  We sang of them in our nursery songs.  We heard our mothers speak of a princess who labored in cinders and dreamed of a prince.  And as we grew, ash became less magical and more mundane.  It was in our science lessons.  We snickered to hear that messy wood ash was needed to make soap.  That seemed so wrong, a contradiction terms.
The years past and I found ash was needed to make so many things.  Cinder blocks are called cinder blocks because they contain ash.  The ash makes them strong yet light: a perfect building material.   And I learned about charcoal.  I learned the silky beauty of writing with a charred vine or the compressed stick.
The years past and I grew beyond drawing with charcoal and focused on paint.   One day I found a new black paint that quickly became my favorite.  The color was so deep and dark.  You could fall into it and never return.  I wondered at the color’s name: Bone Black.  I thought it a joke, for bones are off-white like ivory.  Bones are the color of old lace… unless you burn them.
This is “Bone Black” a jacket for Catherine Fairchild.   We were introduced to each other by Susannah Fox who interviewed Catherine about rare disease.  She mailed me this jacket months ago, but time had past and yet the jacket hung within my closet.  It hung on its hanger, the color of bone beside jacket after jacket in black. As I learned more about Catherine and her story I could see why she would pick this color, this jacket.  Catherine is the mother of two wonderful children: Ella and Billy.
Ella was already a rosy-cheeked toddler when Billy was born in 2002.  The family was happy that Ella would soon have a baby brother.  Catherine had a routine mid-term sonogram during her pregnancy and noticed the report contained CPC codes.  She did not know what that represented so like any good e-patient she registered for 48-hour JAMA subscription.  She found articles that explained those codes were soft markers for many developmental disorders.   She then went through a more thorough sonogram that was inconclusive.
As she neared term Catherine grew concerned that the pregnancy was not doing well.  He was not moving, as he should.  Catherine had another sonogram and was told that she would need a C-section immediately.  The placenta was bad, amniotic fluid was gone and without intervention the he would not survive.
Billy was 5lbs at birth and within two weeks birthmarks appeared on his back.  She told her pediatrician about the café-au-lait birthmarks. Could it be the sign of some type of disorder? The doctor brushed off her concerns.  BB continued to grow and meet his milestones, but at three years his coordination was sufficiently poor that the special education teacher at school said Billy should see a pediatric neurologist.
Again, tests were inconclusive.
A year later, four year old Billy played really hard with a group of boys and then began to limp.  He had a occupational therapy appointment the next day and the therapist concurred with Catherine’s worries, there was something wrong with Billy. He was x-rayed to determine is he broke a bone.
The x-rays determined Billy had lesions all over his bones.
Billy has MAS (McCune-Albright Syndrome) a rare genetic disease estimated to effect between 1 in 100,000 to 1 in 1,000,000.  Characteristics of the disease include café-au-lait marks on the skin, and deformities in the bone known as fibrous dysplasia, and endocrine issues.  Many individuals with this disease suffer multiple bone breaks.   Billy has had several major orthopedic surgeries to address the problems with his bones.
Billy is doing well, though he spends a lot of time in a wheel chair.  He loves legos and enjoys school.  His mother supports him in all his endeavors. I painted her gown the color of bone.  She stands tall and defiant as wind whips at her gown.  Ella clings to her back and Billy is in her arms.  Billy holds two oversize BB’s as though they are a baby’s rattle. Catherine holds scrolls that represent the law and information.  She is e: empowered, engaged, and expert at the disease she is fighting.  No wind can lift her off her mooring.  She fights for her BB.
I am glad to know Catherine.  I am happy to paint her thus, beautiful and defiant.  I used very little of my favorite black color in this painting.  Her colors are her own.  Bone black is created when bone is burnt at a low temperature, to get white the temperature must be very high.  The crucible purifies the color.
Yes, I think I know why Catherine sent me this jacket in this color. 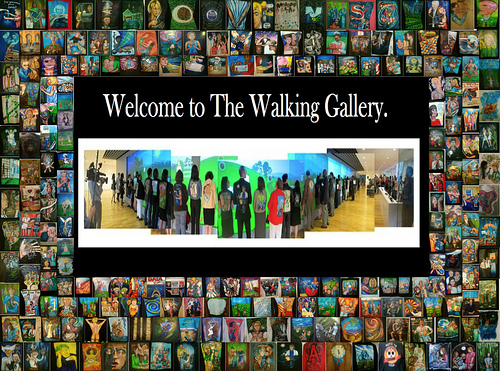 Well, June is almost upon us and with June comes our third gathering of 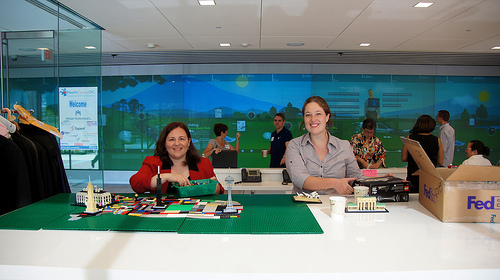 The Walking Gallery: Walking around the World

I am getting ready for the Walking Gallery gathering in Kansas City, and I