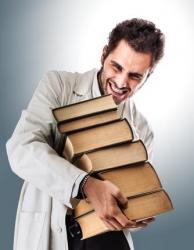 Currently, nearly one out of every 10 Americans aged 12 and older takes an antidepressant ? and for women in their forties and fifties, that number is a striking one out of every four. Somewhat similarly, public health officials in the UK have recorded a fivefold increase (495 percent) in the use of antidepressants since 1991, so in a unique effort to reverse this trend, the National Health Service (NHS) has launched a Books on Prescription scheme: Doctors are writing scripts for book titles as opposed to drugs when treating their patients suffering with depression and other minor forms of mental illness. In short, Britain is hoping to supplant chemical therapy with bibliotherapy, and by some, if not all accounts, such treatment may very well work.

The Online Dictionary for Library and Information Science describes this not-so-old-fashioned remedy as ?the use of books selected on the basis of content in a planned reading program designed to facilitate the recovery of patients suffering from mental illness or emotional disturbance.? By definition, the process would ideally occur in three phases. After a reader personally identifies with a particular character in the recommended work, this might result in psychological catharsis, which would in turn lead to a reader finding any solution suggested by the text to be relevant to her or his own experience. The American Library Association advises the assistance of a trained psychotherapist, yet there?s reason to believe progress could be made on a solo flight as well.

A Presbyterian minister and anti-slavery advocate named Samuel McChord Crothers coined the word in 1916 and in 1962, the journal Library Trends published an issue devoted to the matter of bibliotherapy. Neither, by the way, had self-help books in mind, which is the very opposite of the NHS. Their recommended ?core? book list is entirely devoted to this genre of non-fiction writing and is intended to provide valuable information as well as step-by-step techniques and strategies for successfully managing and overcoming mental health problems, ranging from depression and low mood to anxiety and sleep problems. In fact, all of the books selected by the Books on Prescription scheme are titles recommended by a panel of experts and have been ?tried and tested and found to be useful.? If nothing else, the fact that local libraries offer the listed titles free of co-payment may be the most suitable endorsement of all.

Originally launched during June 2013, the new British scheme has not been in place long enough for public health officials to have tracked effectiveness rates among patients suffering from minor forms of mental illness. In the meantime, though, researchers ? and, presumably, publishers who stand to make a decent profit if all of this is proven to work ? are keeping their eyes on this particular therapeutic ball. After all, behind the high percentages of anti-depressant use are very real rates of patient improvement, even if various experts come down on both sides of this pressing issue.

In a much publicized study released in June 2013, researchers tracking both antidepressant use and suicide rates across Europe determined that medication may indeed be helpful to sufferers of mental illness. ?Suicide rates have tended to decrease more in European countries where there has been a greater increase in the use of antidepressants,? wrote the authors in their conclusion. Having focused their investigation on 29 European countries between the years 1980 and 2009, they found that the use of antidepressants increased on average by nearly 20 percent (19.8 percent) each year, while the overall suicide rate decreased by approximately 0.8 percent annually, corresponding to an overall reduction of 6.2 percent.

Practically, this means that while the UK recorded a fivefold increase in the use of antidepressants since 1991, they also recorded a 14 percent decrease in suicide rates during that same period. The countries with the highest rates of increased use of antidepressants included Sweden, Norway, and Slovakia while lowest rates were recorded in the Netherlands, Switzerland, Bulgaria, France, and Luxembourg. This same study also found the highest current suicide rate in Lithuania (31.5 percent), followed at a distance by Hungary (21.8 percent), while Greece (3.0 percent), Italy (5.4 percent), and Spain (6.3 percent) have the lowest suicide rates of all countries in the European Union (EU). At best, then, a lopsided match exists between increased use of medication and falling suicide rates, while some countries did not see any benefits whatsoever: ?Poland, Spain, and Ireland had annual suicide rates higher in the last year compared with the initial year of observation,? according to the authors. Such concerns are significant to many researchers, while other scientists question whether clinicians are properly prescribing antidepressants in the first place.

Overdiagnosis as well as Overtreatment?

In particular, older adults were less likely than younger adults to meet the criteria, while participants with more education as well as those with poorer overall health were more likely to do so. Despite these discrepencies, though, a majority of both groups were prescribed psychiatric medications. ?Depression overdiagnosis and overtreatment is common in community settings in the USA,? concluded the author.

Certainly, then, America as well as Great Britain would be wise to investigate new treatments for minor forms of mental illness, and if books are found to cure what ails many, then more bibliotherapy! One would hope the newest, trendiest fix would not exclude more colorful solutions, such as the one described by Herman Melville inMoby Dick: ?Whenever I find myself growing grim about the mouth; whenever it is a damp, drizzly November in my soul; whenever I find myself involuntarily pausing before coffin warehouses, and bringing up the rear of every funeral I meet; and especially whenever my hypos get such an upper hand of me, that it requires a strong moral principle to prevent me from deliberately stepping into the street, and methodically knocking people’s hats off -then, I account it high time to get to sea as soon as I can.”

So where does that leave people who want to test this hypothesis but are not part of a formal study/ research program? If you think books could help you manage your anxiety, simply go and buy a few books and see if reading them makes a difference. Check out this article on the best fantasy books out there from CoolThingsChicago, but we recommend staying away from titles that may be tied to post-apocalyptic books, action, thrillers etc. Start easy with some fantasy books that promise a better tomorrow.