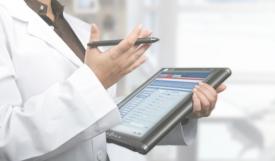 First published on MedCityNews.com. It might be unthinkable to some, but a good chunk of the provider world is still getting its feet wet with the digitization of health data.

First published on MedCityNews.com. It might be unthinkable to some, but a good chunk of the provider world is still getting its feet wet with the digitization of health data.

Clinical Ink, a company that was founded seven years ago out of frustration with the process of electronic data capture for clinical trials, says its business has more than doubled in the last year and has just raised a $4.3 million series B to expand its team and development capabilities.

The Winston-Salem, North Carolina, company markets SureSource, a tablet-based system for capturing clinical trial data. While pharmaceutical and biotech companies have largely embraced web-based systems for sharing and storing clinical trial data, Clinical Ink says many of these systems still require clinical investigators to fill out paper forms with patient information, which is then transcribed and entered into an electronic data capture systems.

SureSource is designed to mirror the workflow of paper documents at clinical trial sites by enabling clinical investigators to record comments, explanations and validated source data during a visit with a clinical trial subject. From there, the data can be delivered to a web portal and sent to the sponsor’s data management system.

It’s designed for tablets, but we’re talking about Tablet PCs. President Doug Pierce told The Business Journal the company would like to expand its offerings to be available at least on Android-based tablets, and potentially the iPad. He said the system is currently being used in 22 active studies.

The new $4.3 million round was led by FCA Venture Partners, a Tennessee firm that invests in early and growth-stage healthcare and IT companies. Clinical Ink was spun out of Piedmont Medical Group, a network of clinical research sites based in North Carolina, in 2006.

The e-clinical trials market is a growing one, fueled by more user-friendly EDC technologies, according to a market report by Global Industry Analysis. Big players include Clinipace, Oracle and MedNet Solutions.