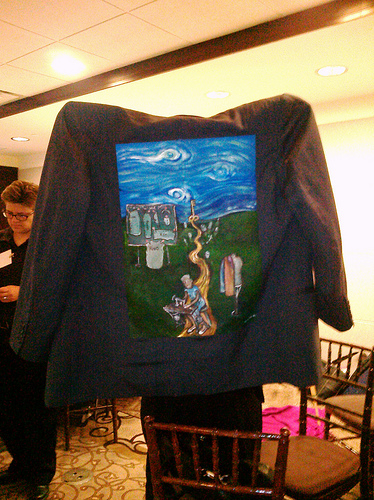 by Regina Holliday 8 min read
Almost one year ago Paulo Machado called me on the phone.  I had been following him on twitter for a while, but he had recently seen Matthew Browning wearing a Walking Gallery jacket and he wanted to talk with me.  He called me up and we talked for a bout an hour about the Walking Gallery and my mission as a patient activist and finally he stopped our somewhat circular conversation with a statement.
“Okay I have you figured out.  You are doing all of this because it is the right thing to do.  You are a do-gooder.”
I said, “Yes.”
He said, “Fine, I will tell you my story.”  About two weeks later we found ourselves at the same event in Philadelphia July 13-14, 2011 at the Regional ONC Meeting. I would paint four jackets in two days and Paulo’s would be the fourth.  He took it off his back and it was a very special jacket.
This is Paulo’s jacket “Custom-Tailored Meaningful Use.”

This jacket was one of the last jackets made for him by his father.   Paulo’s father Armindo became a tailor when he was only a preteen.  He was a master tailor as an adult.  He was amazing and could make any garment.  He immigrated to America in 1969, first working in the textile mills in Philadelphia.  When the mills closed he opened his own tailor’s shop in South Philly.
Paulo worked in the shop as a boy; he would cut and press.  As he grew older he would run the register and handle sales and generally help his father.  When Armindo was in his early forties he began to see his doctor because of some problems he was having.  For the next ten years he would be misdiagnosed with hemorrhoids.
Finally it was determined that he had colorectal cancer and he needed emergency surgery.  Neither he nor his second wife wanted to make waves or question treatment options.  Armindo had a deep respect for doctors that verged on awe as well as having a language barrier that affected his care regiment.  He continued to feel poorly and suffer pain in the following months.
He died at the age of 52.

If you look at Paulo’s jacket you will see his father.  Armindo is wearing the gown and slippers of a patient as his sits at his sewing machine.  Behind him is a pin up board of patterns for a suit entitled Custom-Tailored Meaningful Use.  The parts are labeled ONC, RHIO, ONC, CMS and Beacon.  But Armindo has no fabric beneath his needle as he has been given little tools to help craft legislation.

His sewing machine has been placed squarely on a golden path that leads to a key.  Along the path are the tombstones of the dead.  These are the ones who have fallen as we wait for better communication and timely access to our records.

Above the sky is filled with eyes.  These are the eyes in HIT.  They are watching this vignette unfold.  They can learn from this and change the outcome for others.
Paulo believes care must be personalized clinically, and health policy must be personalized as well.  It must be custom-tailored to the need of the patient.  Technology can make this a reality.  A ready to wear one-size fits all approach will help no one and will chafe over the years.
For the past year Paulo has worn his jacket so many times.  He wears this jacket and people ask questions and listen to his answers.  He spreads the joy of his father’s life in the jacket his father so carefully crafted these many years ago.
Everywhere Paulo goes he is held in a custom-fitted embrace and I am honored to be part of that. 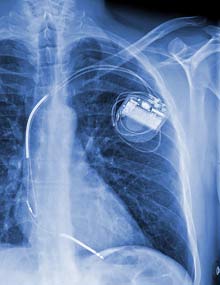 Not only do physicians, hospitals, insurers, need to become more patient centric but also