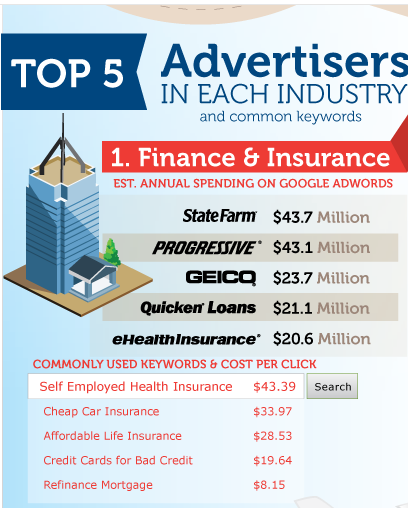 Dr. Google, I’d Like You to Meet Google Insurance Co. Summary: Google Insurance Co.? It might be right around the corner. Google has been tinkering with insurance for a few years now, and its recent activities suggest more of the same. Google’s primary source of income, of course, is advertising, and a quick look at the company’s ad revenue gives a clear picture of business opportunities to come.

Google bought BeatThatQuote, the price comparison service for car insurance, in 2012. It bought Waze, the crowdsourced traffic app, in 2013. It is also, famously, making self-driving cars, which will certainly be using Waze data.

It acquired Nest, the home thermostat service, in 2014.

Not long ago, Google launched Google Compare, an auto insurance pricing tool, in California. (It had been up and running in the United Kingdom since 2012.)

Will Google start writing insurance policies? Perhaps, some have speculated. Forrester Research also carried a piece with some interesting analysis, including the fact that Google Compare Auto Insurance Services Inc. is licensed to do business in more than half the states.

Put that together with the knowledge that insurance and finance are the biggest contributors to Google’s AdWords income, and you’ve got an interesting picture of the strategic plans of the world’s biggest search giant.

So what does this mean for health insurance?

eHealth insurance spent $20.6 million on Google advertising in 2011, the most recent year for which I could find statistics, according to Wordstream, the online ad service and agency. That included the most commonly used keyword, “self employed health insurance,” an incredibly expensive $43.39 per click.

That was well before the Affordable Care Act pumped millions of dollars into the insurance industry.

Now that health spending accounts for nearly 20 percent of the nation’s GDP, and about the same portion of an average family’s annual budget, it’s not hard to see the business opportunity.

Of course, Google Health was one of the bigger flubs in Google’s recent history. But it may have been the wrong health play for Google, and if insurance is in the picture, why would Google stop at auto and home?

So, Dr. Google: I’d like to introduce you to Google Insurance Co. It’s certain to be a happy relationship. Most expensive Google keywords in 2011. Source: Wordstream (via Statista)