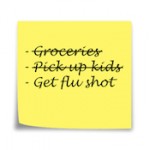 Perhaps the idea of promoting “flu shots” isn’t particularly “glamorous” in healthcare marketing. Some doctor’s offices, healthcare providers (and marketing professionals) consider vaccinations and immunizations as ordinary and routine as remembering to turning off the lights at night. Nobody gives it much thought.

Perhaps the idea of promoting “flu shots” isn’t particularly “glamorous” in healthcare marketing. Some doctor’s offices, healthcare providers (and marketing professionals) consider vaccinations and immunizations as ordinary and routine as remembering to turning off the lights at night. Nobody gives it much thought.

Preventative care and patient wellbeing are at the top of the list, but in addition, here are some new reasons to rethink the importance of “flu shots” as a healthcare marketing opportunity. It seems like everyone wants a slice of the pie.

Most people—particularly those who should—don’t get flu shots. Professionals understand the health risks, and despite ongoing efforts to inform the public, the Centers for Disease Control and Prevention (CDC) reports that only 46 percent of Americans got flu shots last year. Vaccination rates are even worse in certain age categories, according to this detailed article in USA Today.

In their published report, USA Today observes: “At a time when many people are preoccupied with the dangers of Ebola and a rare respiratory virus striking children, [the CDC] announced that fewer than half of Americans are being vaccinated against the flu, which kills an average of more than 30,000 people a year.”

Competition from non-doctors’ offices has skyrocketed (and is still climbing). Virtually every pharmacy in the neighborhood now provides vaccinations, and these and other “non-doctor-office” options are devouring market share. Convenience alone is a big sell-point for consumers who can easily find flu shots available inside supermarkets, big-box retailers, drug stores, shopping malls and, for many, at their workplace.

A widely circulated article from the Associate Press reports: “The nation’s biggest drugstores and other retailers are grabbing larger chunks of the immunization market, giving customers options outside the doctor’s office to protect themselves against the flu, pneumonia and other illnesses. Nearly half of all flu vaccines provided to adults are now administered in non-medical settings like drugstores or worksite clinics.” [TwinCities.com HEALTH]

By the way, it’s not just flu shots. Competition from non-medical settings—particularly the nation’s largest pharmacy chains—includes ongoing promotional messages about vaccinations including:

What you’re up against….

Unlike doctor’s offices, pharmacies and others don’t require an appointment, and in fact, sometimes the flu shot decision is an “impulse buy” that is born out of convience in non-medical settings. It’s usually quick and it’s often paid for by insurance. What’s more, “needle-free” options—such as patches and nasal spray appeal—are appealing to many individuals.

From a marketing perspective, nearly everyone needs a flu shot and potential market is still underserved. And if that’s the marketing opportunity “good news,” the other news is that doctors and other providers are up against tough and growing competition.