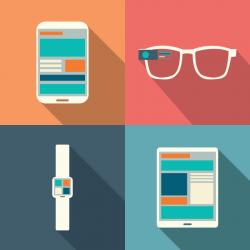 Health-Focused Wearables: Can Innovators, Providers, and Insurers Work Together? I’ve been interested in the new “wearables” segment for a while.

I’ve been interested in the new “wearables” segment for a while. I reached out to Cameron Graham, the managing editor at TechnologyAdvice where he oversees market research for emerging technology, to give us some evidence-driven advice about wearables that entrepreneurs, innovators, healthcare providers, and payers can use for decision making. Specifically, what does the current research show and what are the actionable insights for how to incentivize patients to use them and figure out why patients might pay for them? Cameron thinks that wearable health technology could help improve patient outcome monitoring, if insurance companies and providers work together. He elaborated:

Wearable health technology (or mHealth as some call it) is one of the emerging frontiers in medicine. Fitness tracking devices could allow the healthcare industry to better measure patient outcomes, monitor patient populations for emerging trends, and give preventative healthcare advice based on quantitative measurements (such as daily step counts or heart-rate). We surveyed 979 US adults about their fitness tracking habits, in order to determine current the usage rate for this technology. We then further surveyed 419 of those adults, who identified as non-trackers, about what incentives would convince them to use wearable health monitors. Here are some of our takeaways for vendors and providers:

1. The wearable health market remains small, but is growing steadily

In order to gauge how many adults are currently generating personal health data that would be useful in either patient treatment or preventative medicine, we asked a random, nationwide sample of adults whether they currently tracked their weight, diet, or exercise using a fitness tracking device or smartphone app.

74.9 percent of respondents indicated they did not track any of those variables using either a fitness tracker or smartphone app. 25.1 percent reported tracking such stats.

Out of the roughly one quarter of adults who do track their fitness, 14.1 percent said they used a smartphone app, and 11 percent said they used a fitness tracker. There is currently little data on such demographics, although the Pew Internet Research Project conducted a survey in 2012 looking at similar trends. In their report, they noted that seven percent of adults tracked health indicators using an app. Combining these results, we can see that the market for health tracking applications has approximately doubled over the last two years.

As more consumers adopt such technology, and rely on it for monitoring their health, providers need to become involved in the discussion. There is limited data that can be draw from a sample of just 25 percent of a patient population. If providers can encourage adoption among a majority of their patients however, they will gain greater insight into current health habits, and be able to provide more tailored advice.

2. Physicians can play a large role in encouraging tracking but there are are few incentives in place for them to do so

Looking into what incentives could convince non-tracking adults to use such devices, we found great potential for healthcare providers to encourage tracking habits among their patients. It appears patients want their physicians involved more in monitoring but our healthcare system doesn’t have the right incentives or payment structures available to compensate providers.

48.2 percent of adults said they would use a wearable fitness tracker if their physician provided one. While this may be financially unrealistic for smaller practices, wearable activity trackers (like the FitBit or Jawbone UP) will likely become cheaper as more sophisticated, multi-purpose devices enter the market, such as the forthcoming Apple Watch.

If physicians were able to get half of the three-quarters of non-tracking adults to start measuring their fitness with wearable devices, it would create huge amounts of patient-generated data for the healthcare industry to analyze.

The infrastructure for handling this data is largely in place. The most popular electronic health record provider, Epic Systems, recently announced a partnership with Apple that will allow hospitals to easily integrate wearable data through Apple’s HealthKit platform into patient portals and records.

Promoting the use of such devices should now be a goal for physicians looking to gain greater insight into their patient population. The question would be why Physicians would do this without additional compensation either directly from their patients or indirectly through insurers.

While a significant portion of adults would use physician-provided devices, health insurance companies may be the ultimate key to promoting widespread fitness tracker adoption.

By agreeing to use a fitness tracker, insurance customers would become eligible for special discounts, perhaps for walking a set number of steps each day, or raising their heartbeat for a certain period of time. Discounts could be given out directly or through an employer.

Some companies are already experimenting with such systems. Humana insurance has a new Vitality program that allows employees to opt-in to fitness tracking in exchange for possible discounts. Car insurance companies have also found success by offering lower rates for safe-driving, as measured through in-car tracking devices.

If providers want to encourage fitness and health tracking among their patients, they should evaluate the possibility of providing devices to their patients, either for free or at a reduced cost. At the very least, they should make patients aware of the benefits of such devices, and encourage them to automatically share such data through their patient portal.

Long term, providers will likely need to collaborate with insurance companies in order to establish a data sharing system for such information, which can allow for physicians to better monitor their patient population, and provide more accurate, tailored diagnoses. A universal patient record system would be ideal, although given current interoperability standards, an insurance-provider arrangement is more likely.