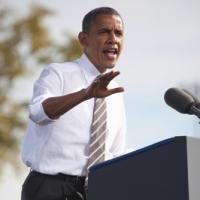 President Obama is getting serious flak from all sides now, with the Big 3 “Scandals” facing him squarely in the face.

President Obama is getting serious flak from all sides now, with the Big 3 “Scandals” facing him squarely in the face. He really needs some good news on the health reform front — especially as Tea Party cognoscenti are using one of those controversies — the IRS one — to drive home to its faithful that the federal agency is directly responsible for all that we know Obamacare to be.

Obama is on the cusp of a nationwide re-introduction tour, of sorts, designed to persuade voters of the law’s merits. Although the WH will be the first to say that it is unconcerned with the repeated grandstanding of activist groups from the right — the Tea Party, included — it is wasting no time getting the president to trumpet his signature domestic achievement, you know … just in case.

Well, this news ought to put a feather in Obama’s cap:

Massachusetts’ healthcare reform didn’t result in substantially more hospital use or higher costs, according to data presented at the American Heart Association’s Quality of Care and Outcomes Research Scientific Sessions 2013. […] ”In light of the Affordable Healthcare Act, we wanted to validate concerns that insurance reform would lead to dramatic increases in healthcare use and costs,” said Amresh D. Hanchate, Ph.D., the study’s lead author, an economist at the V.A. Boston Healthcare System and assistant professor at Boston University School of Medicine. “We were surprised to find little impact on healthcare use. Changes we saw in Massachusetts are very similar to those we saw in New Jersey, New York and Pennsylvania — states without reform.”

Additionally, there was no statistical difference in these findings when compared to safety-net acute hospitals in the state for the period studied. It’s good news for Obama now that’s he’s off the campaign trail and can claim the Grand Massachusetts Experiment as the test case for reform on a national scale. | LINK