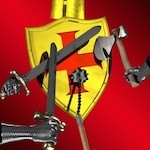 This is a story about competing hospital systems where the legal wrangling spilled into contentious advertising.

This is a story about competing hospital systems where the legal wrangling spilled into contentious advertising. The controversial television and newspaper debate became so heated that the governor intervened. (Without much success, however.)

There are a number of PR hotspots in several states were hospitals, health systems, insurance providers and even politicians are tangled in noisy controversy. Perhaps touched a nerve with our previous post, Whatcha Gonna Do When Hospital Advertising Goes Sour?

In today’s example of ad-wars, the epicenter is Pittsburgh, PA, where one of the most visible squabbles in the nation continues to be played out on several fronts. We’re not about to referee anything here, but as background, the principal combatants are two titans, both with healthcare insurance products and hospital facilities competing for patients and customers :

UPMC – a non-profit health care provider based in Pittsburgh, with 22 academic, community and specialty hospitals and 400 outpatient sites. They are also an insurer, UMPC Health Plan.

The Governor’s intervention didn’t seem to tone down the ad battle, which is described by TribLive Business:

“UPMC and Highmark have been running ads as competition for patients and insurance customers heats up ahead of the Dec. 31, 2014, expiration of reimbursement contracts that give Highmark members less costly in-network access to UPMC.

“UPMC, which won’t renew the contracts because Highmark runs a competing hospital system, is trying to persuade Highmark’s members to switch insurers. Highmark accuses UPMC of being a monopoly and cutting off access to patients.”

The flavor of the advertising messages from both entities has been sour, as reported last summer by the Pittsburgh Post Gazette:

“One of UPMC’s ads was set in a diner, with two customers discussing the finer points of hospital-insurer contracting, and bemoaning that Highmark would be forced to steer customers to the ‘old’ West Penn Allegheny Health System.

“Another featured a woman on the telephone, talking to her insurer—presumed to be Highmark —and concerned that the insurer was trying to steer her away from UPMC and toward another hospital. A third carried the same theme, set in a workplace, with one actress suggesting that ‘I’m not having any of my babies anywhere but Magee.’

“Highmark also came up with its own diner ads, with one customer saying of UPMC that ‘they want a monopoly,’ as well as an advertisement that is reminiscent of campaign-season election ads, with a narrator, standing before blurry background visuals and speaking over ominous background music, saying that ‘UPMC [is] quite honestly trying to deceive you.’”

It’s obvious that corporate passions are heated, and clearly thousands of local residents and businesses may be affected by the state of affairs and whatever eventual outcome. But as an interested-but-distant observer we wonder if the “ad wars” have been helpful or not? Who wins here?

The volleys continue from both camps. Proposed state legislation has been drafted to end the dispute, and Standard & Poor’s downgraded Highmark’s credit rating.

Let us know what you think about the effectiveness of “controversy advertising.” Is it helpful, is it informative, or is it costly, confusing and non-productive? As one media account challenged: “UPMC and Highmark are spending millions of dollars to win the hearts and minds of Pittsburghers. Shouldn’t they instead be working together to cost us less?

You don’t have to look far to find the continuing news coverage:

Checking In? Why Hospitals Are Offering Services

You can’t spell “hospitality” without “hospital.” Many hospitals are taking this to heart

Who knows what lies down the road for hospital marketing? The convergence of factors