With the March 1st sequestration deadline looming, the budget battle continues. Facing potential cuts to public health and stagnant federal relief, ignoring Medicaid expansion could be hazardous to a state’s health.  At least, some states have come to this conclusion.

With the March 1st sequestration deadline looming, the budget battle continues. Facing potential cuts to public health and stagnant federal relief, ignoring Medicaid expansion could be hazardous to a state’s health.  At least, some states have come to this conclusion.

Despite this, the state with the largest number of uninsured seeking medically necessary healthcare chooses to stand tall.  With emergency relief in mind, House Bill 10 was introduced in the Texas legislature this past week to address a shortfall in Medicaid and the Children’s Health Insurance Programs.

As one reporter for the Texas Tribune pointed out, “the federal government is offering to pay all of the costs of expanding the Medicaid program to some of the state’s uninsured population for three years, then to pay 90 percent of the costs for several years after that. Texas could, according to a report commissioned by Texas Impact, an interfaith public policy group, spend $15 billion over the next 10 years and pull down $100 billion in federal funds as a result. (So), here’s the business question: Why leave that kind of money on the table, especially if it’s going to be spent elsewhere if Texas opts out?”

While the article goes on to point out that federal monies would provide relief to local taxpayers currently subsidizing uncompensated care and potentially turbocharge the state’s medical economy, what I found most intriguing was the statement about running healthcare like a business.  Having just had a similar conversation with a colleague from the finance industry, I lamented that healthcare is a unique industry, dangerously siloed with imminent challenges to data access and ultimately, provider alignment – U.S. healthcare’s primary economic engine.

Now, some might argue that alignment becomes null and void in the absence of an adequate number of providers to address the incoming flux of under and uninsured persons.  Imagine instead, the opportunity to increase the number of providers by establishing advance practice nurse led clinics for participation in medical homes. Equipped with patient registries, data analytics and health information exchange, physicians become liberated to focus on chronically ill patients and specialist provider coordination.  And perhaps the most galvanizing of all, instead of penalizing patients for visiting the emergency room, engage them in their care by developing a personal contract with specific achievable goals, provide a personal health record (PHR), mobile apps and texting to help monitor their health while keeping them incentivized via a loyalty program that offers redemption for health related items.

Not only is it the right thing to do, but by embracing this transformational change… perhaps savings similar to Chemung county’s Medicaid Medical Home could be achieved. 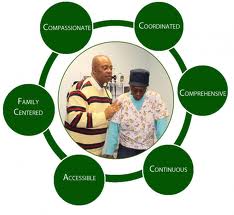 What Sets PCMH Apart from Other Healthcare

Summary:  What is PCMH? What does it mean to provide patient centered care? What