How Crowdfunding Affects the Healthcare Market, and Your Wallet

Crowdfunding may have an interesting effect on the healthcare space. Unlike technology, entertainment, retail and other sectors, novel medical technologies and therapeutics take years of pre-development, and require institutional manpower to further growth. Thus, most biotech and pharma companies do not consider their early-stage investors to be the general public, and only in certain cases are they in a position to raise ‘quick capital’ at this juncture. Further, growth projects tend to be very costly (be it engaging in a clinical trial or in developing new pipeline), and may not yield financial returns for years. Sales revenue and other measures of success may remain theoretical or unavailable through various stages of company growth. Couple this with the perceived high-risk of investing in biotech and pharma and it may not be a favorable space to the average smaller investor.

However, three distinct factors may inspire the crowdfunding community to venture into healthcare.

First is the opportunity to invest in disruptive technology in later-stages of financing. Crowdfunding may be appealing for early-stage companies and startups in other industries, but healthcare companies may choose to rely on it for later bridge financings, before larger raisings, in completing clinical trials, preventing unforeseen developments or in patent protection, to name a few examples. Biotech and pharma companies tend to operate without liquid for much of early-stage and middle-stage operation. Thus, investors may have the opportunity to commit to companies with an established presence or reputation that may simply need to ‘close the gap.’

Secondly, in many cases individuals may not come to expect their financial investment to solely yield monetary gains. The entertainment industry has demonstrated success in appealing to hobbyists and aficionados (often offering nothing more than free movie tickets or screenplays), and a similar case may be made in healthcare companies attracting those with philanthropic goals. Individuals at the lower end of the spectrum ($1,000 to $5,000) may see their investment as a glorified donation, a way to further a good cause and possibly make a profit. Healthcare is one of the few spaces where an investor can see a direct quality of life improvement through a financial pledge. It is also one of the few spaces so obviously rooted in moral tenets.

Lastly, the nature of traditional financing models may be changing. For a variety of reasons, venture capitalists are moving out of the early-stage space. Overall, venture investing in seed and early-stage healthcare has plummeted since 2007, down nearly 33 percent from $3.6 billion, according to a recent NPR story. As the New York Times notes, it isn’t simply an issue of a recession and a conservative investor core, but also speculation over the 2010 Healthcare Act, and subsequent passing of more regulations yielding FDA red tape.

Angel investors may provide seed money, but companies must rely on larger groups of investors and funds to operate with confidence and in a bargaining position for following financing rounds. (A recent Forbes op-ed suggests there is quite an obvious link between venture capitalists and rising health care costs. This could be obvious to savvy crowdfunding investors seeking to fix a damaged system.) Crowdfunding may be an enticing way to build capital alongside confidence in the earliest stages of funding.

The biggest question that remains is whether healthcare companies – regardless of investor interest – see opportunities for small scale financing within a model that requires drastically high operating costs and expectations of significant returns. Many health information and medical device companies consistently raise capital in this window, however the arduous FDA guidance and clearance process carries with it an inherent risk not found in other industries with similar financings. Is there an inherent limitation to the influence of crowdfunding in healthcare?

Only time will tell if rulings such as the JOBS Act will further drive a stake into the traditional financing models, or if the spell of a bleak IPO market is simply a blip on the radar. 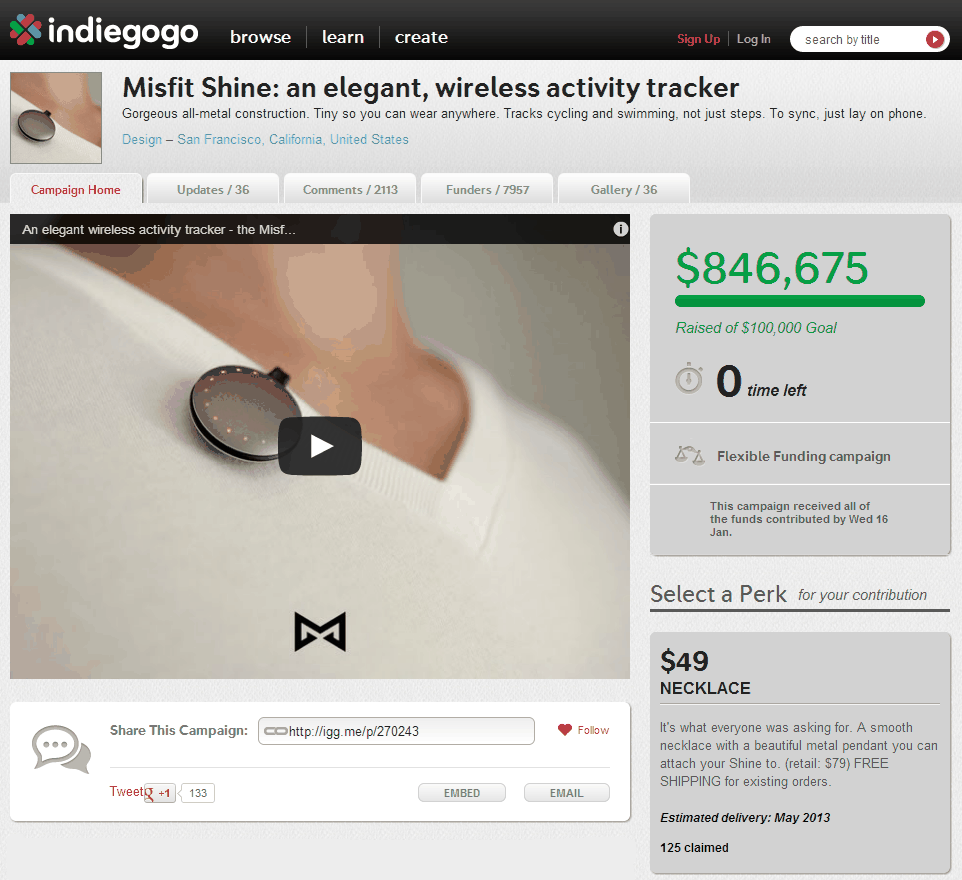 Scanadu Rocks Indiegogo For $1.1M … And

Project testing and funding are necessary steps in the launch of the start-up.  Crowd-funding