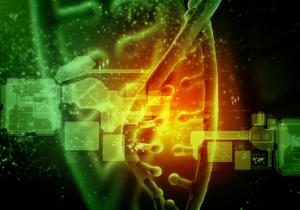 How Did Myriad Genetics Come to Own Our Genes?

A momentous event happened on June 13, 20013: The Supreme Court unanimously voided Myriad Genetics patent on the human genes BRCA1 and BRCA2. Even more surprising: the decision was written and read by silent Thomas. The liberal wing of the court was expected to vote the way they did. But what impelled the paragons of laissez faire ideology to stop in its tracks the pell mell rush to patent the whole of Nature?

First, let’s examine what was at stake.

A momentous event happened on June 13, 20013: The Supreme Court unanimously voided Myriad Genetics patent on the human genes BRCA1 and BRCA2. Even more surprising: the decision was written and read by silent Thomas. The liberal wing of the court was expected to vote the way they did. But what impelled the paragons of laissez faire ideology to stop in its tracks the pell mell rush to patent the whole of Nature?

First, let’s examine what was at stake. The genes BRCA1 and BRCA2 code for proteins that, together with other cellular proteins, form a complex that repairs DNA damage, and if that can’t be done -they cause the death of the cell. When mutations occur in those genes the proteins they code for are ineffective in repairing damaged DNA. And this, it turns out, can cause breast and ovarian cancers,

BRCA1 was discovered by Marie-Claire King,  at UC Berkeley, in 1990. But to discover the existence of the gene is only the first step: it needs to be cloned so as to be able to sequence its nucleotides and manufacture large quantities of it. Four years after the discovery of the gene it was cloned by scientists at the University of Utah, the National Institute of Environmental Health and Myriad Genetics, which at the time was a small start-up biotech company. Myriad Genetics received the controlling patents on the genes, and that allowed them to develop assays to determine the various mutations on BRCA1 and BRCA2. Since the assays are based on the structure of the genes, and since Myriad Genetics held the patent on that structure, nobody else could develop a competing assay. Myriad Genetics had a monopoly, and behaved like a monopolist; they charged exorbitant fees for running the assays, and they aggressively went after any hospital or academic institution that intended to develop an assay of BRCA1 and BRCA2 for research or diagnostic purposes. Myriad Genetics grew from a tiny start-up to a large biotech company with $500M in revenue in 2012.

Now mind you, I have nothing against small start-ups or biotech companies, or a combination thereof; some of my best friends are entrepreneurs. But I do have strong feelings about stupidity. And that’s exactly what Myriad Genetics has displayed. If you do something that is potentially controversial, like patenting genes that all of humanity owns, at least don’t draw unwanted attention to yourself. Myriad’s aggressive pursuit of scientists and physicians who deigned to develop their own assays of BRCA1/2 brought upon them the wrath of the scientific community, medical organizations, patient advocacy activists, the civil rights community, and constitutional and IP lawyers. Once this scrutiny was focused on the company, a hue and cry ensued: they are patenting our genes!

How could that happen in the first place?

Without starting from Genesis 1:1 (“in the beginning…”) let me just describe a relatively recent phenomenon. In 1973 Richard Posner, an influential conservative legal scholar at the University of Chicago, published a book, Economic Analysis of Law, that gave impetus to the creation of a movement that has become influential in American law schools and the corridors of power. According to the Internet Encyclopedia of  Philosophy (IEP) “the law and economics movement applies economic theory and method to the practice of law. It asserts that the tools of economic reasoning offer the best possibility for justified and consistent legal practice…The general theory is that law is best viewed as a social tool that promotes economic efficiency (italics by the author), that economic  analysis and efficiency as an ideal can guide legal practice.  It also considers how legislation should be used to improve market conditions  in return.”

In other words, quaint concepts such as justice, fairness, or equity are fine as long as they don’t clash with the overriding function of the law: increase economic efficiency. Cost and benefit analyses migrated from corporate offices to the courthouse and legislature. As an example, science has demonstrated that  people living downwind from coal power plants suffer from impairment of lung function, and increased incidence of emphysema and lung cancer. But the cost of shutting down such plants and/or compensating the victims would have been too high, in the eyes of the court. Hence, all suits asking for judicial relief were denied. Likewise, scientific evidence that maximum allowable emissions of mercury were too high was quashed by the EPA and the DOJ of the G.W. Bush administration on the basis of cost-benefit analysis.

This theory is not limited to public health issues. Data were generated purporting to show that regulation interfered with the smooth functioning of the economy. Consequently, both Democrats and Republicans, as well as the Clinton and George W. Bush administrations embarked on massive deregulation of the financial industry. Today’s SEC refuses to intervene in practices that are being presented as  increasing market efficiency (called High Frequency Trading) despite the fact the in reality the “big guys” are profiting at the expense of the “little guy”. The DOJ of the Obama administration did not bring anybody to justice in the wake of the financial disaster, because it would have been disruptive to the economic recovery, as their officials testified before congress.

So finally we come to the issue at hand. Myriad Genetics was awarded a patent on human genes because in Intellectual Property jurisprudence the same principle applies: maximize economic efficiency. The theory was that not granting a patent would result in the stifling entrepreneurship and and innovation. Never mind the evidence of 200 years of the unpatented discoveries of hundreds of enzymes, hormones, proteins, genes -everything that makes up life. Imagine if all these substances were the property of corporations. The human body, in all its wonderful complexity, would have been reduced to a collection of substances whose sole function was to maximize profits. Trade secrets would have inhibited the incredible strides science is making in conquering disease.

The Supreme Court is populated with disciples of the Law and Economics movement. So why did they reject the patenting of Nature? The charitable interpretation is that they woke up to the absurd consequences of this theory when pushed to its logical extreme (in philosophical argumentation this is called reductio ad absurdum). I have a more jaundiced view of the matter: the supreme court is not insulated from public opinion. They can feel free to classify a corporation as a person, or equate money with speech because it does not arouse passions in the “man on the street”. But awarding the ownership of what makes me “me” is a different matter; it is easily understandable so as to become a subject of conversation “around the kitchen table”, as politicians are wont to say. The justices are political animals, all pretense notwithstanding, and they must have sensed that this is politically dangerous territory; this particular issue,  intuitively so abhorrent to the common person, could cause a backlash leading to a critical reexamination of the whole legal/economic theory.

the big mistake that Myriad Genetics made was drawing attention to itself. In the process they did us a big favor in shining a light on the absurdities (and injustices) that the intellectuals of the Law and Economics movement have wrought.