So I wake up on July 4th to my usual Monday morning routine, reading the papers. I am stopped cold by the New York Times headline informing me that “2 Republicans Open Door to Increases in Revenue.” Whooaa. This is news. So I read on to learn that Sen.

So I wake up on July 4th to my usual Monday morning routine, reading the papers. I am stopped cold by the New York Times headline informing me that “2 Republicans Open Door to Increases in Revenue.” Whooaa. This is news. So I read on to learn that Sen. John Cornyn of Texas told interviewers on one of the Sunday talk shows that “he would consider eliminating some tax breaks and corporate subsidies in the context of changes in the tax code, provided there was not an overall increase in taxes.”

Hello. That is not what the headline said. And his position — revenue neutral ”tax reform” that essentially raises taxes on some corporations so it can be lowered for others — is not new, is something both parties have endorsed and does zero, nadaa, bupkes to move the political dialogue over raising the debt ceiling toward resolution.

On to the Washington Post where I learn from columnist Robert Samuelson that liberals are reactionaries and conservatives are radicals in how they approach Medicare and Social Security. Liberals are reactionaries because they “pine” for the good old days of the 1940s through 1960s when Americans “had confidence in government,” which leads them now to defend “virtually all” Social Security and Medicare benefits that can be financed by cutting defense and taxing the rich. Conservatives have become radicals because they are seeking drastic “reform” of lower taxes that would require dismantling the social safety net for seniors.

This turns political reality on its head. People defending existing structures like Social Security and Medicare are, in classic political science terms, conservatives. They want to preserve what is, and what has been promised to the generation now approaching retirement. His use of the word “virtually” is a tacit admission that there is flexibility in this ”liberal” position, which is actually conservative in the Edmund Burkian sense of that word in that they seek to preserve Medicare and Social Security. The new “conservatives” recognize the social reality that vast swaths of the American population are dependent on these two systems.

Meanwhile, who are these new “conservatives” who would remove those guarantees to seniors? Are they “radicals” trying to establish a new order? Again, in classic political science terms, they are not. They are reactionaries attempting to reestablish the pre-Great Society ancien regime. The expansion of the welfare state was stopped in the 1980s, and rolled back in the 1990s (remember welfare reform?). Now these modern-day reactionaries united under the Tea Party label want to go back to a time  to a time when government was small, most seniors didn’t reach old age, and most of those who did lived in poverty and without access to basic services like health care.

No wonder young people are turned off to politics and don’t read newspapers. If they are college educated or have bothered to study history, they would open the pages (or look online) at headlines that misinform and columnists who wilfully distort the basics of political science and economic history. 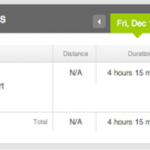 Fitbit Profile Sexual Activity Shows up in Google Search Results, What Else Could?
Next Article Jumping into Health Care Social Media