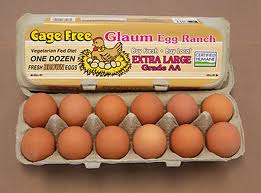 Outrages of the Week in Food and Medicine

Ok someone explain the logic behind this to me.  The egg isn’t in a cage, so it is allowed to be free- to roam around and enjoy the fresh air? And for this we pay more because the egg, which is about to be scrambled, lived a beautiful egg free existence. Ok someone explain the logic behind this to me.  The egg isn’t in a cage, so it is allowed to be free- to roam around and enjoy the fresh air? And for this we pay more because the egg, which is about to be scrambled, lived a beautiful egg free existence.

Ok- the real reason is they let the hens lay eggs anywhere and they gather them up instead of like a factory – but who cares. They taste the same. Is it marketing- all marketing.

If you care so much about the chicken and the egg – stop eating them.

Does Burger King really care about our health that they are selling lower fat French Fries — and they are charging us more for them! Here is the odd part: it is costing them less to make them, so they are still making money, and the amount of fat in these fries is 25% of the recommended amount of fat in a diet for a day.  It isn’t a deal, and it isn’t healthy, and it is a rip off.  How do they make less fat fries, you ask? Simple: you cut the fry larger. A larger piece of potato means more potato per surface area- thus less oil per volume of fry. Truvia and Stevia – the artificial sweetener

Truvia’s manufacturer, Cargill, agreed to settle a “class action” law suit because some plaintiffs in Minnesota were claiming that Truvia, unlike Stevia, isn’t really natural . Ok – let me get this right: Stevia is a “natural” artificial sweetener and Truvia is an “artificial” artificial sweetener.  Want this doctor’s advice about artificial sweeteners – avoid them, all of them. You don’t need anything that sweet, and if you ever had too much truvia or stevia – well, it tastes like your tongue is wrapped in Electrical tape.

This is an outrage, and as someone who does weight loss surgery this is not something that the surgeons should be bragging about- they should be begging the medical world for forgiveness. The two year old didn’t need weight loss surgery – the two year old needs parents.  Like when I have to say no to my three year old son – I don’t like it, I have to put up with some crying sometimes, but it is part of the job description under “dad.”  If I fed my son crap, and lots of it, he could be obese – but his mom and I limit him.

Here is the sad fact: that child has a limited capacity in his stomach, and he wasn’t fed properly before surgery. So are those parents now going to pay attention to what he eats? Now they pay attention? Because if they don’t he will have severe micronutrient deficits – and he will starve. And starvation from lack of nutrients is a miserable, slow death – just like scurvy. I hope that child gets what he really needs — a parent.