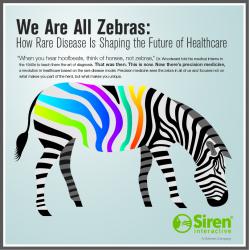 As the mother of a child with a rare disorder, I’ve watched with interest and admiration as this community has broken one barrier after another—innovating, advocating, collaborating, fundraising, organizing—all with one unwavering goal, to stop or reverse the suffering inflicted by a rare disease on someone they love.

As the mother of a child with a rare disorder, I’ve watched with interest and admiration as this community has broken one barrier after another—innovating, advocating, collaborating, fundraising, organizing—all with one unwavering goal, to stop or reverse the suffering inflicted by a rare disease on someone they love.

The fact that rare disease communities have been responsible for the deconstruction and reinvention of many aspects of our healthcare system along the way is not just a coincidence. Progress in treating rare diseases has been facilitated by:

Paving the Way for Precision Medicine

Those same forces are responsible for the sea change that is taking place in medicine in general.  When President Obama announced his Precision Medicine Initiative, budgeting $130 million to establish a one-million strong database of peoples’ genetics, health, and lifestyle data at the National Institutes of Health (NIH) and scale up efforts to identify genomic drivers in cancer and insure data security, he was publicly acknowledging what people in the trenches already knew, that the future of medicine will be targeted treatments for subpopulations.

There is still a good deal that has to be worked out.  Money for starters.  How will a system that is already strained to the breaking point cover the cost of targeted treatment? Long-term, it is possible that precision medicine may actually be a way to lower healthcare costs by not treating those who cannot benefit and by reducing the need for complex and expensive treatment for chronic and debilitating disease.

What about the issues of privacy and the proprietary nature of research and development? Huge quantities of data can be collected through electronic medical records (EMRs), health apps, and voluntary sharing of genetic information, and $5 million of the budget was dedicated to developing privacy standards. But will people share their data? Once again, the patient registries that rare disease communities have generously contributed to are a model for the future. Their message is a simple one: if you care enough, you can make it happen.

Rare Disease and the Future of Healthcare

The skills that rare disease patients and caregivers have had to develop to be successful will be useful for all of us to adopt as we move forward into this brave new world of healthcare.  Take, for example, the empowered patient movement made up of active and educated health seekers who take charge of their own care. Consider the concept of team science—with patients themselves driving not only the clinical endpoints, but also the research itself.

As the Precision Medicine Initiative moves forward, I suspect that rare disease communities will continue to have an important role to play because of the immense knowledge they can contribute. In a recent post , Matthew Might, a researcher and parent of a child with a rare disease, points to the inferential power of rare disease with this statement: “Given the choice between 10,000 rare disease genomes and 1,000,000 random healthy genomes, as a scientist, I would choose the 10,000.”

It won’t always be easy, but easy isn’t what rare diseases are about. We’re about community. That’s the other place where rare diseases have set the standard. Whatever the challenges, we will face them together.