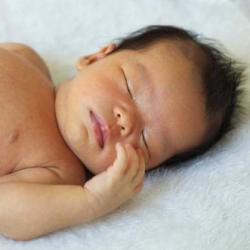 “The baby looks normal during the day; there’s nothing that would tell you that baby is going to die of SIDS that night.” With these words recorded in a

“The baby looks normal during the day; there’s nothing that would tell you that baby is going to die of SIDS that night.” With these words recorded in a press release, Hannah C. Kinney, who has studied sudden infant death syndrome (SIDS) for more than 20 years, describes every parent’s worst fear. Currently, she and a team of researchers are continuing to explore a link between abnormalities in an infant’s brain stem and SIDS. Specifically, having compared brainstem samples from infants dying of SIDS and infants dying from other causes, she believes SIDS may be associated with a low production of serotonin in the brainstem.

Past and Present Focus

Sudden and unexplained death is a leading cause of infant mortality. Each year in the U.S., about 4,000 infants die of no immediately obvious cause, and about half of these deaths are attributed to SIDS. Unexplained though such deaths may be, research has suggested that certain sleep environments increase the risk for SIDS. For example, parents should avoid placing an infant in any situation that may increase the risk of asphyxiation, such as sleeping face down or with a blanket close to the face.

In a study published two years ago, Kinney and her team of researchers focused on an analysis of serotonin levels in the brainstem. During sleep, serotonin in the brainstem helps regulate some of the body’s involuntary actions, such as breathing, heart rate, and blood pressure. To conduct their study, the team obtained tissue samples of brainstems from autopsies conducted by the San Diego County Medical Examiner’s Office in California. Then they measured the levels of serotonin and tryptophan hydroxylase, the enzyme that helps make serotonin, in 35 infants who died from SIDS as well as two control groups consisting of infants who died from other causes.

The serotonin levels in the lower brainstem of infants who died of SIDS were 26 percent lower compared to the control infants. Additionally, tryptophan hydroxylase levels were nearly 22 percent lower. For the team of scientists, this discovery led to a desire for further exploration.

Knowing that infants are exposed to different levels of the potential for asphyxiation — some situations may include more “smothering triggers” than others — Kinney and her team decided to test the hypothesis that infants with severe deficiencies of serotonin and other neurochemicals succumb to death even without smothering triggers — such as sleeping face down — whereas infants with only intermediate or borderline deficiencies of neurochemicals will not succumb to death unless smothering triggers are present. For the present study, then, Kinney and her team went back to the San Diego County Medical Examiner’s Office and classified all the cases of infant death into categories based on whether potential asphyxia stressors had been present at the time of death or not.

The researchers did not prove their hypothesis. Although neurochemical abnormalities were present for both the SIDS infants who died in the presence of smothering triggers and SIDS infants who died in the absence of smothering triggers, no differences existed in the levels of neurochemicals between the two groups. That said, both groups had significantly lower levels of serotonin than the control infants who died of causes other than SIDS. In other words, the researchers continued to see a link between SIDS and an abnormal level of serotonin in the brainstem, but they did not find a link between the severity of serotonin deficiency and smothering conditions.

In conclusion, the researchers recommended that parents always remove SIDS risk factors when putting down their infants for the night. All infants under the age of 12 months should be placed on their backs to sleep. Their cribs should contain a firm mattress but no toys, no soft pillows, no extra blankets, and no excessive clothing.