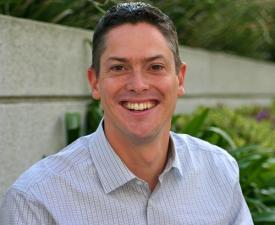 Eric Peacock founded the social site MyHealthTeams to help people suffering from chronic diseases and their friends and families find better ways to communicate with each other and share valuable information. In 2011, the site began with the launch of MyAutismTeam, an interactive social media site serving people with autism. It has since expanded to help people with breast cancer and multiple sclerosis (MS), and Peacock plans to create many more disease-specific sites. We talked with Eric about his plans and the role of social media in healthcare.

What role can social media play in disease-centric communities?

We believe that when you’re diagnosed with a disease, it should be easy to find the best people to help you.

For breast cancer, for example, you should easily be able to connect with thousands of women in the same shoes as you are. With MyHealthTeams, you can find and connect to them. These are people who get what you’re talking about. Similarly, it should be easy to find great providers who can help women with breast cancer.

Right now, with the tools on the Internet, you and I can find a taqueria that’s open until 2:00 a.m. and takes groups; why shouldn’t it be just as easy to find an occupational therapist?

Specifically, what does MyHealthTeams do?

It creates social networks for people with chronic conditions. It’s a hybrid of Facebook, Yelp, and Pinterest, designed just for women with breast cancer, parents of kids with autism, and people with multiple sclerosis (MS).

How did you get inspired to create this site?

Before MyHealthTeams, I was running a site called Insider Pages, and I previously had worked at Perlegen Sciences. I’d worked with large communities of people with chronic diseases; these people had a passion, but were woefully underserved by the web. All these social media and web tools are out there; and they were wishing they had them at their disposal after diagnosis.

We decided to build our first site and see what would happen. Our first site was MyAutismTeam, for-parents of kids with autism. I had a relative who was on the autism spectrum and I saw how hard it was to find resources. In June 2011, we started with 35 parents in San Francisco. After a month, it had about 200 parents. We were reaching out to local support groups, and had a lot of input from parents early on. They were so excited. We started promoting it on Facebook. A year later, the site had grown to 25,000 parents. I’d never experienced anything like this before. Now, almost 50,000 parents are on the site. It’s growing without any marketing. We became the official network of AutismSpeaks. And I had four minutes of fame on the TODAY show, which produced this massive spike of signups. That shows the importance of traditional media, even in our digital age!

How well did providers take it?

I thought we could do this for hundreds of conditions. The breast cancer team raised $1.75 million in a seed round (a lot for an early-stage project). With MyBCTeam, we’re already connected to over 200 cancer centers all around the country, including Kaiser Permanente, UCSF, Beth Israel, MD Anderson. If you’re treated at one of these centers, they hand you our brochure. This site provides a gap most providers cannot fill. Providers have limited time with this diagnosis that changes a woman’s life.  And more pressure is going to be put on doctors and nurses, because of HIPAA and other compliance rules, and the Affordable Care Act, so they’re completely overwhelmed.

Why do you think newly diagnosed women were attracted to a dedicated online social media platform for sharing information?

All of these women have this kind of basic instinct. They all say the same thing; once they’ve been diagnosed, they go home and Google like they’ve never Googled before. They want to learn from others who have been in their shoes. Doctors and nurses love to recommend a site where people can learn from each other. And for the women, they say things like “I’m not just dealing with this for 15 minutes, I have breast cancer all the time, and I need to get more information.”

Are there lessons from the online world that can be taken offline?

We’ve heard people say “I think about the fact that I have breast cancer every few minutes, not just when I’m in front of a doctor. It’s all the time for me.” There’s no reason we should expect consumers to have different expectations about healthcare than any other consumer service out there; we need information immediately. Right now, the frequency of engagement with healthcare is way below what is required.

I saw a presentation recently, where a company was presenting an invention for women with breast cancer, and were about to go through reconstructive surgery. Today, women have to get their skin expanded before surgery. It’s a really painful process, and takes several weeks, to go into a medical center and expand the skin with a hydraulic pump. But this company had an air pump, which the patient herself can control. Now, she can pump a little bit, maybe once or twice a day, which is less painful and probably easier than going to a facility for the bigger skin pump every several weeks. This is bringing in more consumer control and frequent engagement, which we’re seeing in social media, but can also be applied to medical innovations like this one.