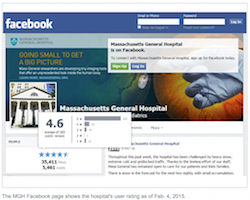 Who Knew? Facebook Tops HCAHPS as Measure of Care You don’t have to look far to find a chorus of concerns about the HCAHPS survey tools. But you need look no further than the enormously popular Facebook for real-people feedback.

You don’t have to look far to find a chorus of concerns about the HCAHPS survey tools. But you need look no further than the enormously popular Facebook for real-people feedback.

In a quest for a uniform means of comparison for the informed patient/consumer, hospital administrators and managers continue to be challenged by the ways and means of improving HCAHPS numbers. Conscientious hospitals have added their own means and methods to assess patient care, experience and satisfaction.

As it turns out, studies have validated a correlation between Facebook and quality of care. It seems that social media is a useful barometer for patient feedback in addition to HCAHPS, patient panels, quality improvement groups, follow-up phone calls and other measures.

“A new study from Massachusetts General Hospital (MGH) investigators finds a correlation between how hospitals are rated on Facebook’s five-star system and how well they performed on a widely-used measure of quality care,” according to MGH. The study, published online in the Journal of General Internal Medicine, compared hospitals’ 30-day readmission rates with their Facebook ratings.

“’We found that the hospitals in which patients were less likely to have unplanned readmissions within the 30 days after discharge had higher Facebook ratings than were those with higher readmission rates,’ says lead author McKinley Glover, MD, MHS, a clinical fellow in the MGH Department of Radiology.

“Hospitals should be aware that social media ratings may influence patient perceptions of hospitals and potentially their health care choices,” the authors advise. “Hospitals and other healthcare organizations should also be aware of the potential message they send by not using social media.”

If this has a familiar ring to it…

But this isn’t the first academic study that linked social media to satisfaction. About two years ago we published an article titled, Hospital Facebook LIKES Reflect Patient Satisfaction and Lower Mortality Rates. We reported that, according to findings published by the American Journal of Medical Quality, the number of “Likes” on a hospital’s Facebook page can be used as a proxy for patient satisfaction and an indicator of hospital quality.

And for related reading, see: HCAHPS: Missing the Measure of Experience vs. Satisfaction. From a marketing point of view, it’s useful to remember that satisfaction surveys look backward, and they don’t tell you how many prospective patients never made an appointment or declined to use the facility.