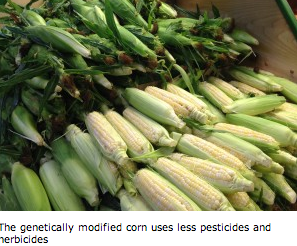 Just the opposite is true. GMO plants have saved farmers in Illinois, Wisconsin, and Iowa billions of dollars the last two decades in those toxic chemicals.  The GMO plants are designed to use less chemicals than other seeds

While less herbicide is used (weed killer) the weeds are getting resistant to the herbicides currently and new super weeds are being found. Weeds use natural selection (the first type of genetic engineering) so that those weeds that survive the herbicide grow and reproduce.

The toxins engineered in the plants, like Bt, are deadly to humans and cannot be washed off

Bt toxin (from the bacteria Bacillus thuringiensis) has been extensively tested and is not toxic to humans or other animals. In fact, Bt, a toxin made by bacteria, is used widely by organic farmers because it is a natural way to control pests. While some have reported animals that have died in fields of Bt cotton or corn, when autopsies of the animals were done other causes were found. In fact, many deaths from farm animals occur in places all the time- This same Bt toxin has been used to decrease mosquito outbreaks in Africa, to decrease malaria and dengue fever. Other strains of the Bt toxin are being examined for activity against leukemia and breast cancer.

In spite of an impressive array of safety, all toxins have some downside. No matter which pesticide, or how safe, there will collateral damage – Monarch butterflies who feed on milkweed, for example, do not do as well when they are near corn that pollinates with Bt toxin.

As much as science searches for a perfect toxin, this certainly is not it. On the bright side new research into pheromones that are scents that keep pests away are being tested.

Monsanto will have a monopoly on seeds and this is bad

Monsanto does sell the most seeds of any of the major seed makers, but does not have a monopoly.  Since the 1940′s farmers have found purchasing seed was easier than raising their own and proprietary seed makers have become an industry.  Monsanto sells 23% of the GM seeds in the US, currently. There are a number of other seed makers that sell GM seeds, as well as non-GMO seed suppliers. Having a number of suppliers insures a more stable market.

They engineered tomatoes to withstand cold by putting the gene in from an Arctic fish, which is why tomatoes taste bad Fresh, wild salmon- not farm raised, and no genes of this fish went into a tomato

There is no tomato-fish. While this was an experiment, it never came to market. The reason most tomatoes from the store are mealy is they are picked before they are ripe. They do not ripen as a normal tomato would, and thus have an off taste- especially to those who know what a fresh, garden ripened tomato tastes like.

What You Should Worry About:

Genetically engineered salmon that will be farm raised are coming, and like most farm-raised salmon will have less flavor, less beneficial omega-3 fatty acids, and cause more pollution that the wild salmon. Many fish are over-fished and present a danger to our food supply – farm raised fish are not as sustainable as wild fish.

The photographs of the corn, and others that are circulating are all doctored photographs- they are fake. Humans have very sophisticated taste buds, much more than a squirrel or birds. The photographs have been put up as “proof” when in fact, all studies contradict them. In addition, why is it that they blame GMO for killing some animals, when there are fields adjacent with non-GMO feed.  They get tripped up in their own arguments. The has been widely viewed on the internet – and is a doctored experiment.

What You Should Worry About:

If you are eating at a lot of chain restaurants, or a lot of processed foods, you are probably obese, and should be eating more whole foods, plant based diets.  If you like meat, you should be eating meat from specialty farms where they are raised on grass instead of grain.