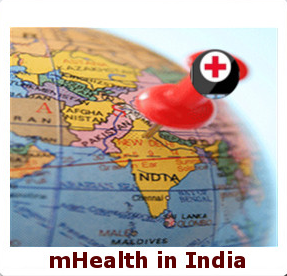 Mobile Health Around the Globe: Indians Expect To Lead The mHealth Revolution With large penetration of mobile phones in the country (close to 1000 million cellphone users, teledensity >79%), India has realized that mHealth adoption will play a very important part in improving access and quality of healthcare in the country. Countries like China, Brazil and the US have all turned to mHealth in varying degrees. There are significant differences in mhealth adoption among emerging and developed nations. A recent survey from PricewaterhouseCooper tries to assess the climate for utilization of mHealth in 10 developing and developed countries.

The extensive study included a patient survey with over 1,000 respondents, a physicians’ survey with 433 physicians and a payer survey with 345 respondents. The study shows that expectations are high for mHealth from patients, providers and payers. Consumers are ready to adopt mobile health faster than the health industry is ready to adapt. Here are a few key findings from the study relevant to India:

The main drivers for patients using mHealth in India are

The main barriers in patient adoption of mHealth in India are cost, lack of relevant applications and unwillingness of doctors.
The main drivers for physician use of mHealth in India were
The main barriers in physician adoption of mHealth in India were lack of interest and unavailability of information about mHealth.
Of all stakeholders, Physicians are generally the most reluctant lot to adopt mHealth. In the whole study, 60% of active users of mHealth say that patients and technology companies are more interested in mHealth than physicians. Though Indian physicians seem more amenable to adoption of mHealth compared to physicians in most other countries, we still have a long way to go. Having doctors join the mHealth revolution will be the key to ensuring optimum benefits for the patients. And that, my friend, is going to be a tough task.
To read other posts in this exclusive ongoing series, please visit the Mobile Health Around the Globe main page. And if you have a Mobile Health Around the Globe story to tell, please post a comment below or email me at joan@socialmediatoday.com  Thanks!