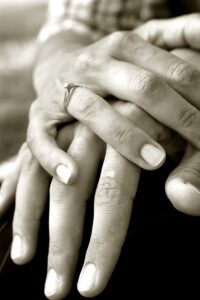 “What you’re going through is so horrible. I can’t even imagine being you.”

We don’t need any context to know that these pearls of insight belong firmly in the category of “things we should never say to other people.” While we’d like to think that we’re more sensitive sorts; we’d never say anything that egregious to a family member, friend or co-worker who was contending with a long-term illness or injury, sometimes, in our haste to say something – anything – to express our sympathies, we trip over our tongues.

“What you’re going through is so horrible. I can’t even imagine being you.”

We don’t need any context to know that these pearls of insight belong firmly in the category of “things we should never say to other people.” While we’d like to think that we’re more sensitive sorts; we’d never say anything that egregious to a family member, friend or co-worker who was contending with a long-term illness or injury, sometimes, in our haste to say something – anything – to express our sympathies, we trip over our tongues.

“There are times when we just don’t have the words to make it better,” explains Mary Bohlen, a social worker at the Herman & Walter Samuelson Children’s Hospital at Sinai who counsels families through life-altering diagnoses such as cancer and sickle cell anemia. Mary makes a careful distinction between sympathy and empathy. Sympathy, she says, “is feeling pity for someone; empathy is feeling with someone.” This may seem like a split hair of difference, but there are worlds of distance between feeling sorry for someone and sitting with them during their troubles. When writer Emily Rapp’s infant son was diagnosed with Tay-Sachs many supposed well-wishers told her that they “couldn’t imagine” what she was going through. “I found it offensive,” she told an interviewer for Time magazine. “For people who are grieving, it makes you think, ‘No one can imagine my sadness. I’m out here in the sadness hinterlands.’”

We don’t need a GPS or night-vision goggles to lead our loved ones out of these hinterlands; a simple, “thinking of you” can be the best route. We often have an overwhelming urge to set everything right, right away – especially when someone close to us is struggling – but sometimes even our most default thoughtful gesture – asking what we can do to help – can be an inadvertent agitation. “Dealing with a long-term illness can be very stressful for a family, so they might not always have an answer ready when someone asks what they need,” says Bohlen.

If actions speak louder than words, then taking on some everyday tasks on your friends’ behalf (like making a quick stop at the grocery store, pet-sitting or even taking out the garbage) positively sings. There is, of course, that old chestnut of goodwill: Preparing meals for folks whose days have become a checklist of check-ups. If the extent of your kitchen wizardry involves boiling water without burning yourself, consider giving a prepaid gift card for a grocery store or a big box outlet. This isn’t just a useful gift – though anyone who has ever gone cross-eyed at the number that pops up on the register can attest that it definitely is – it also puts the power in the hands of the person who’s received the card: They can spend it whenever they need to (and it won’t just take up space inside their freezer).

These kinds of pragmatic gestures are always appreciated, but don’t be afraid to put the gift back in gift card. Lisa Friedman, a social worker at the Rubin Institute for Advanced Orthopedics, has lived through both sides of the patient experience: Her daughter has received treatment for Crohn’s disease at the Samuelson Children’s Hospital. As she balanced her responsibilities as a care provider at work and at home, she came to savor small, sensual pleasures like the fragrance and texture of body lotion. “One of the best things friends and family can do is remind you to take care of yourself,” she says.

Teddy bears and flowers are certainly sweet, but lilies wither in their vases, and there are but so many uses for umpteen stuffed bears in tutus or green scrubs. Friedman explains that, at times, the most thoughtful presents are the ones that allow patients – and their families – to disengage from what they’re going through, like gift cards that let them load up their MP3 players, smartphones and e-readers. “They offer a pleasant distraction, especially when people don’t necessarily feel like socializing,” she says.

No matter what we choose to say, the truly important thing – the thing that will be felt the most deeply in difficult moments, and appreciated long after all the casserole pans have been washed and returned – is the sincerity in our words. Knowing that her family was in so many other people’s thoughts buoyed Lisa Friedman’s spirits: “Just asking ‘how are you doing?’ can be so powerful.”