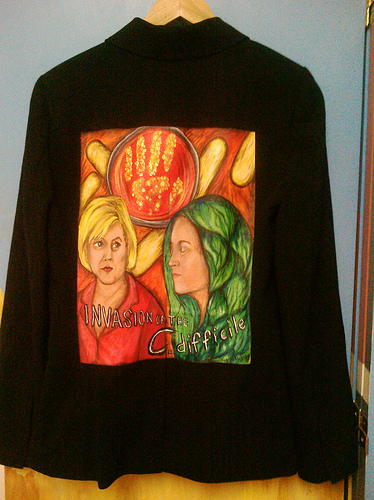 Invasion of the C.Diff

by Regina Holliday 8 min read
I often do things that frustrate my children.  Whether is singing loudly off-key or ruffling their hair in front of their friends, my response to their complaint is always the same.  “When I stop doing this you will know the pod people got me.”  I say this even though the children have no clue what the pod people are.  I say this even though in my deepest heart the pod people scare me.
Of all the films I saw as a child, two frightened me the most.  I am not talking about the surprised jump scare that is staple of the slasher movie.  I am talking about the kind of intellectual scare that keeps you up at night. The kind of scare that makes you plot and plan what you would do if you found yourself stuck within this horrific story.
“Invaders from Mars” released in 1953 was a film you would not want to be stuck in.  The story followed a young boy who sees an object crash from the sky.  His father goes to investigate and comes back different.  He no longer acts like his father.  The boy sees more and more of the townsfolk change.  It is terrifying; no one is admitting that people are being replaced with doppelgangers.
The next horror epic etched within my mind was “Invasion ofthe Body Snatchers” 1956 and 1978.  In this tale people insist that imposters have replace their loved ones but the main character does not want to believe them at first.  He then finds out that giant plant pods contain alien replicas of earthlings.  These pod people replace and destroy their human counterparts.
Both films depict the body human being invaded and destroyed, first as an individual then as a species.  Which brings me to Pat Mastors and her jacket “Invasion of the C. Diff.” Pat is an amazing advocate and speaker.  She is a photogenic beauty who was a television reporter before entering the world of advocacy.  In 2007, her whole world changed due to the invasion of a spore.
Have you heard of C. Difficile?   For the average Joe-citizen the answer is no.  Many people have heard of super-bugs and perhaps MRSA, but c. diff is often left out the media limelight.  I learned about it a few years ago when I was designing a painting.  I was talking to environmental specialist who works in a hospital.  He told me of all the nasty infection agents, he was most afraid of c.diff in the spore stage.  It was so hard to kill and most of his cleaning agents would not destroy the shell of this invader.
In about 3% of healthy adults and 70% of healthy infants c.diff is a naturally occurring bacteria in the intestines.  Its growth is kept in check by other bacteria.  When patients take an antibiotic, the bacteria balance is upset and many of the residing bacteria die.  If a patient ingests c.diff spores while they lack the necessary competing bacteria the c.diif bacteria will experience explosive growth.  The patient will experience flu-like symptoms and diarrhea.  The infection can grow to the point that patient is in anguish and is estimated to result in death in 25% of the elderly frail who contract the infection.
Pat Mastors knows all of this because in 2007 her father fell.  He got up in the night and fell down the stairs.  He was injured in the fall and needed surgery performed on his neck.  He acquired c. diff and died six months later.
Pat was outraged.  No one seemed to know about c.diff and it was so very dangerous.  She began to blog about it.  She lay awake at night and pondered what could she do to protect people.  She created a plastic sleeve to cover TV remotes in hospitals.  The surface of the TV remote is one of the leading culprits in infection.  She tried to talk with hospital staff about needed safeguards to prevent hospital-acquired infections.
But like the plot of a scary science fiction movie people were not listening.  They ignored this danger from within and the idea that people were being colonized.  Pat was alone in her knowledge.  So within Pat’s painting, I place her staring in worry at a nameless woman in her pod.  Pat knows what will happen when spores descend. Not long ago Pat showed me the Patient Pod she created.  She has learned the lesson of her enemy and knows the strength of an impervious shell.  She created a plastic sleeve that mounts on a hospital bedrail with a special clip.  Here you can put your personal things. A photo of you and your family, your cell phone and some plastic sleeves for your remote.  You can keep your things safe and clean.  You can wash the pod off with a bleach solution that kills spores.
There are only two ways to fight c. diff: keep surfaces clean and limit overuse of antibiotics.  Pat is doing all she can as a patient advocate to save lives by providing clean surfaces.  Pat listed herproject on Medstarter.  I urge you to fund it.  She is saving lives and spreading awareness.  I will support her in her mission and if I ever stop doing that you will know …the pod people got me.