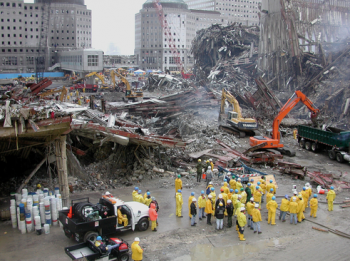 The days after September 11th, 2001, the city of New York was enveloped in a blanket of ash. Rescue workers spent hours, days, even months without rest sorting through rubble and dust, exposing themselves to all kinds of physical dangers. These images are well documented in newspapers, television images and museums. But the haunting images from the aftermath, including the one of firemen I keep in my kitchen, do not tell the ongoing story of the men and women who risked their lives, physical health and mental health to dig the magnificent city out of the ash.

Despite the immediate coverage of heroism for the country’s rescue workers, very few have taken time in the last 12 years to fully research the physical and mental toll taken on those individuals that risked their lives on September 12thand the following days. According to the City’s Department of Mental and Physical Hygiene “thousands of individuals—including rescue, recovery and cleanup workers and people who lived, worked or went to school in Lower Manhattan on September 11th—have developed chronic, and often co-occurring, mental and physical health conditions.”

Most of what is known about the issues affecting thousands of domestic and international rescuers has been collected by the New York City HealthDepartment’s World Trade Center Health Registry. This Registry, which allows health professionals to track and investigate illnesses and recovery related to September 11th also helps create guidelines that can save lives and reduce injuries in future disasters.Dr. Robert Gillio, who is significantly responsible for its creation claims that, “The Registry was not part of any preplanning. Nor was the care of the New York Police Department (NYPD) or construction volunteers. I got a panicked call from someone that knew I had developed a middle school lab kit enabled laptop with curricula for how to measure heart and lung function and learn how to protect them. It was something I created for my four daughters to make health and science education more interesting.”

Following that creation, Dr. Gillio says, “When I joined up with a team of volunteers screening NYPD officers, this early telemedicine app was used to create health records. We had the presence of mind to realize the vast differences in the levels of exposure and decided to create questionnaires for what is called risk stratification.”

From that point forward the Registry has provided guidelines for domestic and international health care providers to care for those who volunteered in the aftermath of September 11th by creating flow charts, tracking systems and symptom coordination for individuals who may be experiencing conditions related to World Trade Center exposures. The database has collected information on more than 70,000 people over a decade and includes not just the official heroes of September 2001, the NYPD and the Fire Department of New York (FDNY), but also the volunteer and paid professionals that tended to health care at the site, search and rescue teams, demolition and hauling teams, those who cleaned apartments and residents that moved back into the neighborhoods.

All of these individuals took health-related risks, risks that are hard for many of us to understand, but none more so than the first responders. I certainly would not be one to run straight into the face of danger, despite that being in my genes. Growing up in a family of firemen meant that we came to terms early on that loved ones would risk their lives to save others. However, the honor and pride these men have shown throughout our lives often leaves us in fear. My admiration for my Father’s inherent need to help others gave way at times to fears of losing my hero to saving the lives of others buried in ashes. When asked why he chose to become a fireman, my dad, Rodney Fender, humbly said, “It’s just who I am. I want to help people.” He went on to describe the feeling that overcame him as a fireman, the one to rush into danger, saying his logical reaction to the call was, “How the hell do I get in there, and how do I get them out safely.” His immediate response has never been to think about himself above others.

When asked about this innate desire to risk oneself, it became clear that my father, like many rescuers simply react in a way that brings out the best in human nature. A mentality of our heroes following September 11th, who were still there working through the ash and rubble, was best summed up by my grandfather, Michael Fender, also a fireman who said, “It’s just your job as a person to help other people.” He went on to explain that first responders have a mindset like his, “You do what you can, when you can, how you can. That’s just how we work.”

September 11th was a day that changed American lives forever, one that shook our faith in humanity to its core. Like all US Citizens, mental health and safety were altered in significant ways during that time of fear. For the rescue workers though, the risks of danger did not end with the last plane crash or the decision to go to war. For the first responders, volunteers and health care professionals and researchers, September 12th marked another day to face physical and mental health risks to save the lives of others.

The image of an ash covered park in New York City with firemen working tirelessly in the background has been in my kitchen for many years, and serves as a daily reminder to the resiliency of this country, its citizens, and especially its heroes. Although their images are almost invisible in that photograph due to the devastation surrounding them, they are there, digging the city out of the rubble and piecing the lives of others back together.

In a similar vein, Dr. Gillio sat down soon after the attacks to write Lessons Learned at Ground Zero, an essay to, “Help explain to my daughters why mom and dad were away at Ground Zero when planes were falling out of the sky near us in PA. That book found its way to the White House and lead to a request for participation in a series of discussions there regarding the role of the average person or local organization in disaster preparedness, response and recovery. Those lessons in 2001 changed my career from one that treated preventable disease to one that finds ways to discover who is at risk and to intervene to prevent a chronic disease or acute injury and to empower the individual to be the health hero for themselves and their community.”

His message, and that of my father and grandfather, is correct. The terrorist attacks in 2001 changed American life forever. But as health care experts, providers, researchers, policymakers and first responders, it is our duty to take the lessons we learned from those horrific days, weeks and months to build a better system of care. Our job is to use our skills and passions to improve our communities as a whole and prevent, as well as care for, one another as best we can.