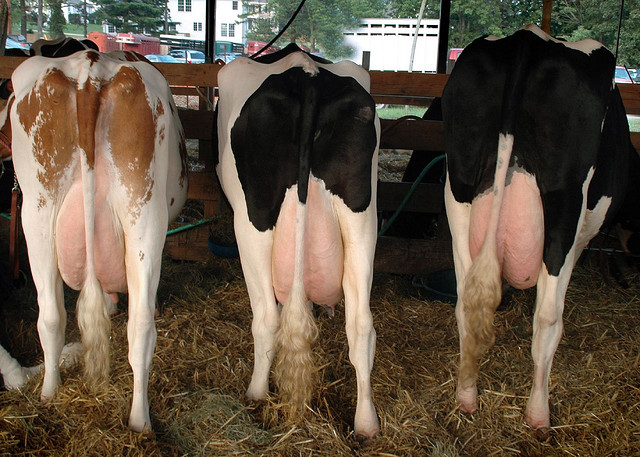 Of Cows, Milk, and Humans

Oh gods,whoever you are: please save me from True Believers.

Oh gods,whoever you are: please save me from True Believers.

I recite this prayer whenever I am asked, nay interrogated is more apt, about the latest food public enemy number one. For a while I had run-ins with fructose haters. Then poor old gluten took over as the source of all ills afflicting modern civilization. More recently I received an email informing me that milk is toxic! Really? All these years I’ve been using milk with my morning cereal I have been poisoning myself? And all those Scandinavians who are consuming milk by the gallon, what would become of them? In a moment of weakness I decided to investigate.

A short perusal of the internet will tell you that milk containing the protein β casein of the A2 variety will cause the following afflictions:

What a list! The only thing missing is milk-generated global warming. No, no, wipe the smirk off; bacterial metabolism  in the cow’s gut forms methane. And this gas in the cow’s flatus (Latin for the common fart), is a big factor in global warming… Now, some of these conditions, such as diarrhea, bloating and gas, are well-known to be caused by lactase deficiency, the enzyme that breaks down the milk sugar lactose to its glucose and galactose components. But what’s the evidence for the protein casein causing all those human plagues?

Turns out that as is true for every cult, milk haters have a guru and a “Bible”. The guru is one Dr. Keith Woodford, and the Bible is his book “The Devil in the Milk”. The devil, as we know, can disguise himself in many forms. In milk it is disguised as an innocent-looking peptide, called BCM7 which is released from casein during pasteurization. Food chemists divided casein into type A1, which releases little BCM7, and type A2, which releases much more. The reason for that, for those of you who are intellectually curious, is that about 5000 years ago a mutation occurred in the gene coding for casein, and a proline was replaced by a histidine. The mutation occurred in Holstein cows, those black and white behemoths that happen to provide most of the milk in Europe and the Americas. And so, for 5000 years Western Civilization has been poisoning itself. Before you get alarmed, let’s look at the quality of the evidence. The peptide caused ‘schizophrenia-like, autism-like and a lot of other-like symptoms in rats. Of course, this peptide, 7-amino acids long, does not cross the intestinal wall to enter the circulation. Not to worry, the investigators injected the rats intravenously. How many people are injecting milk intravenously, or for that matter anywhere in their body? One study showed that after incubating BCM7 with nasal mucosal cells, some of the peptide adhered to the cells. So? It might explain nasal congestion in some milk drinkers…Advice to the allergic patient: don’t pour milk in you nose.

When you don’t have direct evidence, you resort to suggestive evidence. For instance, schizophrenia and autism are more prevalent in A2- drinking countries than in countries that drink milk with A1 casein (Africa, Asia, southern Europe). Epidemiologically, such studies suffer from a fatal flaw: there are known confounding factors (which can be accounted for in the analysis), known-unkowns (which cannot be factored into the analysis), and a multitude of unknown-unknowns (that, by definition, will never be  accounted for). In other words, the main value of such studies is in tantalizing cocktail party conversations.

If the story ended here – no real harm done. Let them drink goat, sheep or camel milk (no devil lurking in those). But when approximately the same kind of people deprive their children of life-saving vaccinations because of the firm belief that it causes autism, schizophrenia, ADHD, etc. etc., this can be fatal.

I think that many, if not all, food fads, both positive (ward off the common cold, inhibit cancer, prevent Alzheimer’s) and negative (causing allergies, causing cancer, causing intestinal disease, causing fogging of the brain), suffer from the same deadly combination: poor science and uninformed true believers. Trouble is, no matter how convincing the evidence to the contrary, their faith is unshakeable. Hallelujah!