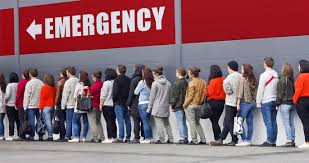 The Affordable Care Act will allow 30-40 million new patients to have access to hospital services – particularly emergency room services. ERs are already notoriously overrun and patient dissatisfaction about wait times and care quality are abound. With even more patients expected to grace the department than ever before, how can your ED prepare?

In the United States many hospitals already struggle to treat a fairly large percentage of patients who routinely utilize emergency room services for routine care. More often than not they know they don’t have a true emergency, but if they don’t have a primary care doctor and are not near an urgent care center, they feel they have no choice. Before, the high cost of utilization in the emergency room services for something relatively minor may have dissuaded some patients – but with Obamacare allowing more patients to be insured, there’s less concern about how they’ll pay for services.

Doctors are already strung out by “high utilization” of their relatively specialized services for things that could best be addressed in a primary care office – sore throats for one.

One reason that emergency rooms are viewed as being relatively inefficient is that they were never designed to be primary care or urgent care centers – the medical staff, the triage staff, the procedures and even equipment were designed for emergency care – not routine care. Throw a bunch of strep-test seeking patients into this mix and of course you can expect the throughput to the wonky.

Emergency rooms are providing a lot of care that they weren’t designed to be responsible for and it’s negatively impacting not just physician morale, but patient satisfaction. The fear now, of course, being that even more patients will be utilizing these services incorrectly – so what’s an emergency department to do?

The overarching goal of Obamacare has always been to provide more patients with health insurance coverage so that they could – and would- be under the care of a primary care doctor. In fact, one of the major goals of the ACA was to take some of this care burden off emergency rooms and give poor patients wider access to primary care services – so why didn’t it work?

Perhaps the most obvious answer is that there is simply a shortage of primary care doctors in the United States. New medical school graduates are moving towards area of specialization for several reasons, but perhaps first and foremost because that’s “where the money is” – not to mention that being a surgeon or a narrowly focused specialist is, perhaps, more in line of the excitement and drama that many young people assume is totem in medicine based on film and TV depictions. Often, too, primary care would require young physicians to work in rural medicine, which would mean moving out of the glitz and glam of young cities and, instead, living in quiet, rural (and perhaps even older) communities that would be less of interest to them.

Long has been the struggle of a Medicaid patient in America being able to find a primary care doctor who will actually accept state-based insurance. It’s not that doctors don’t want to treat these patients – it’s that historically, accepting this level of insurance meant very little, if any, reimbursement for them. It wasn’t economical for them to take on a Medicaid patient when they could take on a privately insured patient and actually make money. The way the payment model is changing for physicians, we might gradually see more of a willingness to accept Medicaid patients – but only if the government holds up their end of the deal of reimbursement.

The demographic for Medicaid, that is, patients living near or below the poverty line, may be working several jobs in order to make ends meet. Since most doctor’s offices are on a fairly 9-5 schedule, many taking a mid-day hour long lunch, scheduling an appointment is often harder for many people than it might seem. Some practices offer evening and weekend hours, but for the single parent trying to work several jobs to keep food on the table, even that might not be enough.

Since emergency rooms are always open and, by law, have to at least see patients, they would appear to be a one-stop shop for even minor health problems. Particularly for patients who are desperate to receive care and have a very limited window of opportunity to do so. This, however, leaves a particularly bad taste in the mouth of emergency room physicians who, even if they are aware of these challenges, are relatively unsympathetic – it’s not the patient’s fault, it’s the system’s, but still the doctor feels powerless to change it.

The more patients cramming into an emergency room, the longer the wait times. The longer the wait times, the lower the patient satisfaction ratings and, perhaps too, the lower the patient health measures. The lower these scores, the less reimbursement for a physician – by the new payment model of value-based care. You can easily see how this situation has quickly escalated and, at the very least, is making physicians nervous for the future.

The only solution seems to be building up our national reserve of primary care physicians, create financial-based incentives to accept Medicaid patients, and find ways to entice young doctors to practice general and/or rural medicine.

Easier said than done, of course.