You heard the news…nearly couldn’t miss it. Retail drug store giant CVS will phase out the sale of tobacco products before year’s end. That’s the headline, but it’s the rest of the story that you may have missed, and it isn’t all good news for doctors, medical practices and healthcare marketers.

You heard the news…nearly couldn’t miss it. Retail drug store giant CVS will phase out the sale of tobacco products before year’s end. That’s the headline, but it’s the rest of the story that you may have missed, and it isn’t all good news for doctors, medical practices and healthcare marketers. It’s likely to hit you in the bottom line.

NATIONAL NEWS: At top, and highly visible level, is the much heralded and widely reported news announcement by CVS Caremark “that it will stop selling cigarettes and other tobacco products at its more than 7,600 CVS/pharmacy stores across the US by October 1, 2014, making CVS/pharmacy the first national pharmacy chain to take this step in support of the health and well-being of its patients and customers.”

On the big scoreboard this was a grand slam. Not only was it published nationwide, but additional news coverage followed with the applause of no less than the President of the United States, the American Cancer Society and many other health and civic voices.

EVEN MORE PUBLIC RELATIONS: Going a step further, CVS backed their action with a pledge to help millions of Americans quit smoking. “We will undertake a robust national smoking cessation program expected to include information and treatment on smoking cessation at CVS/pharmacy and MinuteClinic along with online resources,” CVS announced.

BRANDING AND REPUTATION: Industry wide, drugstores-selling-cigarettes has been a branding non sequitur. CVS isn’t the first major retailer to dump tobacco products, but their high-visibility announcement pays big dividends for their reputation as a health and wellness leader. In short, the move delivers on their brand promise.

Some competitive retail outlets will take up the slack as CVS vacates. But more significantly, the direct competitors in the pharmacy world may well be motivated to follow the high-road trend and drop tobacco sales themselves. With big dollars involved, the decision will not be an easy one.

The healthy living benefits aside, from a business perspective, the revenue involved is what gives the CVS announcement considerable financial gravitas. “The company estimates that it will lose approximately $2 billion in revenues on an annual basis from the tobacco shopper.”

But—and this is the part that wasn’t obvious in the primary news coverage—deep in the CVS news release it said: “The company has identified incremental opportunities that are expected to offset the profitability impact. This decision more closely aligns the company with its patients, clients and health care providers to improve health outcomes while controlling costs and positions the company for continued growth.”

Please take note and file it under the changing competitive landscape. A major corporate announcement that releases $2 billion in annual revenue is not made without an aggressive board-level plan to replace the lost sales. The specifics of CVS Caremark’s plans remain “undisclosed,” but the direction is apparent.

As the nation’s healthcare delivery system continues to reinvent itself, CVS and others continue to carve out a new provider niche. This month, tobacco products and smoking cessation have the spotlight, but the market and competitive changes are much more far reaching.

“Responding to the overall shortage of primary care practitioners in the United States and to recent legislation that expands access to health care coverage,” an online Viewpoint article published in The Journal of the American Medical Association observes, “most pharmacy chains are retooling themselves as an integral part of the health care system.

“They are offering more counseling by pharmacists, an array of wellness products, and outreach to clinicians and health care centers. For example, Rite Aid has developed a new wellness-store format, and Walgreens is testing a “health and daily living” design.

“Perhaps more important, pharmacies are moving into the treatment arena with the advent of retail health clinics. More than 1600 such clinics are operated by Walgreens, CVS Caremark, Rite Aid, Target (which does not sell cigarettes), Walmart, and many chain grocery stores.

“The clinics are designed to offer an alternative to routine care by office-based physicians.”

Nationwide, cigarette smoking has been on the decline. And, across the board, healthcare providers, hospitals, professional associations and public health officials have universally applauded the CVS Caremark announcement. On one hand, medical professionals have proper reason to commend the corporate move toward improving the health and well being of Americans.

From a business and marketing perspective, doctors and marketing professionals are taking note that CVS and other retailers are clearly committed to reinventing themselves as a provider resource to the public.

The number of CVS MinuteClinic locations—presently over 800 in 28 states—is expected to swell to 1,500 in the next three years. And given this year’s rapid tobacco product phase-out, it appears likely that the competitive environment will radically intensify this year. 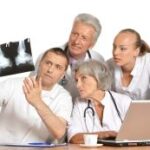 A Meeting of Minds on the Value of Healthcare IT
Next Article Up Next for Care-Hacking Startups: Transforming Data into Action