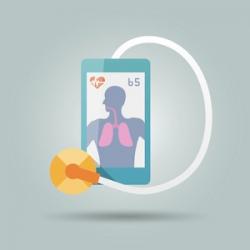 Congress Getting Serious about Telemedicine: Are CDOs Ready? The latest ‘doc fix’ bill, H.R. 1470, was introduced last week. Though it has quite a ways to go before it’s sent to conference or passed, the bill has some pretty nice language for telemedicine and care coordination enthusiasts.

The latest ‘doc fix’ bill, H.R. 1470, was introduced last week. Though it has quite a ways to go before it’s sent to conference or passed, the bill has some pretty nice language for telemedicine and care coordination enthusiasts. Though it’s probably less than I would like, Section 4 (Encouraging Care Management for Individuals with Chronic Care Needs) is a great start.

The telehealth language is pretty general but I like how it is making sure that telemedicine isn’t precluded from being reimbursed. Most interesting is that GAO is being asked to do a study on telehealth services, which is a good precursor to further refinements. It doesn’t help the industry immediately but sets the stage for long-term success for sure.

This new legislation plus the upcoming American Telemedical Association (ATA) 2015 Conference got me thinking about how interested patients are in telehealth. Kathleen Irwin, a medical market researcher at web-based EHR evaluation group Software Advice, recently conducted a survey report drilling down into health consumer’s perception of the growing telemedicine industry. As we’ve seen in previous telehealth research, the Software Advice survey found that the great majority (75%) of patients are interested in virtual visits. While the interest from patients is obvious, most care delivery organizations probably aren’t ready to take advantage of it.

There’s a significant opportunity for providers who can offer these high demand services, so I spoke with Kathleen to discuss the implications of her findings on practice revenue and whether or not current medical software is prepared to handle telemedical visits. Here’s the transcript of our conversation:

Will patients will they pay out of pocket for virtual or televisits?

Patients are clearly interested in virtual visits, but is their desire for these services compelling enough for them to foot the bill unaided? 56% of the patients we surveyed said they are unaware if their health insurance provides coverage for telemedical visits. Moreover, although telemedicine care models have been touted as highly cost-effective, only 4% of our sample cited cost as a primary benefit, possibly due to their lack of awareness about coverage.

Rather than guess at a patient’s willingness to pay out of pocket, where their perception might not align with reality, it seems more practical to focus on the fact that insurance coverage for telemedicine is on track to increase over the next few years, so those patients without telehealth coverage won’t have to shoulder the entire cost for long. As of January 2015, 22 U.S. states currently require insurers to reimburse for telemedicine visits and in-office visits equally, and several more states have such legislation in the works. As more states adopt these parity laws, it’s likely that insurance companies will increasingly push patients toward telemedical services for overall cost-savings.

Will physicians increase revenues because of it?

Given patient demand, it seems paradoxical that we keep hearing about providers who offer these services not seeing a return. Their struggles with reimbursement are due in part to a lack of continuity between payer networks and provider/outsourced telemedical offerings. However, several pieces of healthcare regulation appear focused on ironing out these kinks in communication and billing, so the future of physician reimbursement looks brighter.

Multiple studies have linked an increase in physician revenue with the implementation of telemedicine via one of two models- either offering telemedicine as an alternative to an in-office visit within their own practice or working as a consultant for an established telemedical organization that connects patients to on-call physicians. Both models are designed to boost existing revenue streams and a decision between them should be based on which makes more sense for an individual practice’s workflow and culture.

In marketing a private practice’s telemedical services, focusing on the benefits most valued by patients in our survey, like the convenience of virtual visits from the comfort of home, can serve to boost revenue by both attracting new and retaining current patients. Telemedicine also promises to reduce the number of patients who miss appointments due to transportation issues or work conflicts, which results in capturing what would be lost revenue for overbooked primary care physicians.

Is the billing and scheduling technology ready to service the providers who want to offer telemedicine?

The majority of practice management solutions features on Software Advice are prepared to handle the demands of telemedicine. With billing applications, virtual visits generate a superbill that is sent directly to insurance companies or the patient/provider is personally responsible for submitting the bill for reimbursement, based on the model of telemedical services the provider offers. As for scheduling, virtual appointments can be made in the same manner as a regular visit if the physician is offering them within their own practice. If they are working as an on-call provider for an independent telemedicine service, physicians can simply block out pre-arranged times in their schedules to guarantee their availability during telemedical consults.

That being said, with the relative newness of telemedicine, physicians should be careful to double check that their current systems are truly capable of working with the necessary reimbursement systems. Many telemedicine SaaS companies offer built-in billing and scheduling, which are another option for physicians who want an all-in-one solution. As telemedicine becomes more widely insured, smooth integration with a provider’s existing software will become standard.

Join me at at the ATA 2015 Conference in Los Angeles to learn more about telehealth, virtual visits, and related digital health technologies. Congress is getting serious, but care delivery organizations may not be ready.