Ok, you tell me will this be abused?  We all know that on the web text is misinterpreted all the time and this is why “smiley” were created to help convey the message properly as when we speak, tone tells the story but with text we don’t 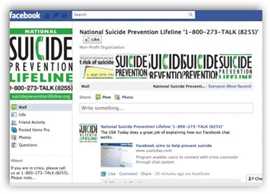 always know.  Everyone tends to be a bit candid on the web too and to me for those who go this route, with big companies and insurance companies mining our taxpayer data for free, you might end up with being an insurance risk when the analytics are run and your assessment due to this information on Facebook end up being in a high risk group, whether one is serious or not about the suicide issue so if you do not go through with it and put all your emotions out there for a buddy to turn you in, the data collection side might save your life but you are going to pay with risk assessments and potentially higher insurance rates.  Some people just quit Facebook and call it Facebook suicide.

Call your friends on the phone and show some “human”empathy and get them to call the center rather than this route if they are really a valid friend as when suicidal thoughts take place usually a voice is much better to console than a text box!  I don’t know about you but seeing the Surgeon General behind this again makes me question our leaders today and their beliefs in how some technologies are best used.  We all know that Facebook keeps having these erupting privacy issues so I don’t think the suicide button is going to be a huge success myself, again other than getting your data mined adding some information you might not rather have out there.

Maybe I should link up Jimmy Kimmel as he thinks all should “unfriend” everyone and maybe he has a real good point.  I don’t know as I don’t mess with the site anymore as it was too time consuming for me to talk to all who reached out, I have work to do so was not worth my time any more.  HHS gets confused on social networks too with running a contest for an app for “disaster relief” and contacts and I hope “riots” are not under that category, not recommended there.  A couple months ago this post flew all through the geek channels with disbelief of the contest and a few snickers.  I like our surgeon general but I don’t think again most in government understand social networks, much less use them much and so we end up with stuff like this as well as a bunch of folks on the Hill who can’t do math either.  BD

HHS Seems To Be Confused on Social Networks–Facebook for Disaster Support Contest, Give Me a Break Use Twitter Like Everyone Else Does

Actually I’m tired of companies like Facebook making billions and millions by using “free taxpayer data” and not having to give back.  We should license and tax those folks for their use of taxpayer data they get for free and again make millions off the backs of taxpayers.  BD

Facebook has a new service that will enable users of the social network to report friends who have expressed suicidal thoughts and make sure they get an offer of help from the National Suicide Prevention Lifeline.

Friends will be able to report suicidal behavior by clicking a report option next to any content on the site and choosing suicidal content under the harmful behavior option, Facebook spokesman Frederic Wolens told Reuters.

Facebook will then send the suicidal person an email that will encourage them to call the National Suicide Prevention Lifeline (phone number included). The email will also include a link that will enable those who would prefer not to talk on the phone to begin a confidential online chat session with a crisis worker.

Surgeon General Regina M. Benjamin commended Facebook and Lifeline for addressing suicide — which she described as one of America’s most tragic public health programs. In a statement she said that nearly 100 Americans die by suicide every day.