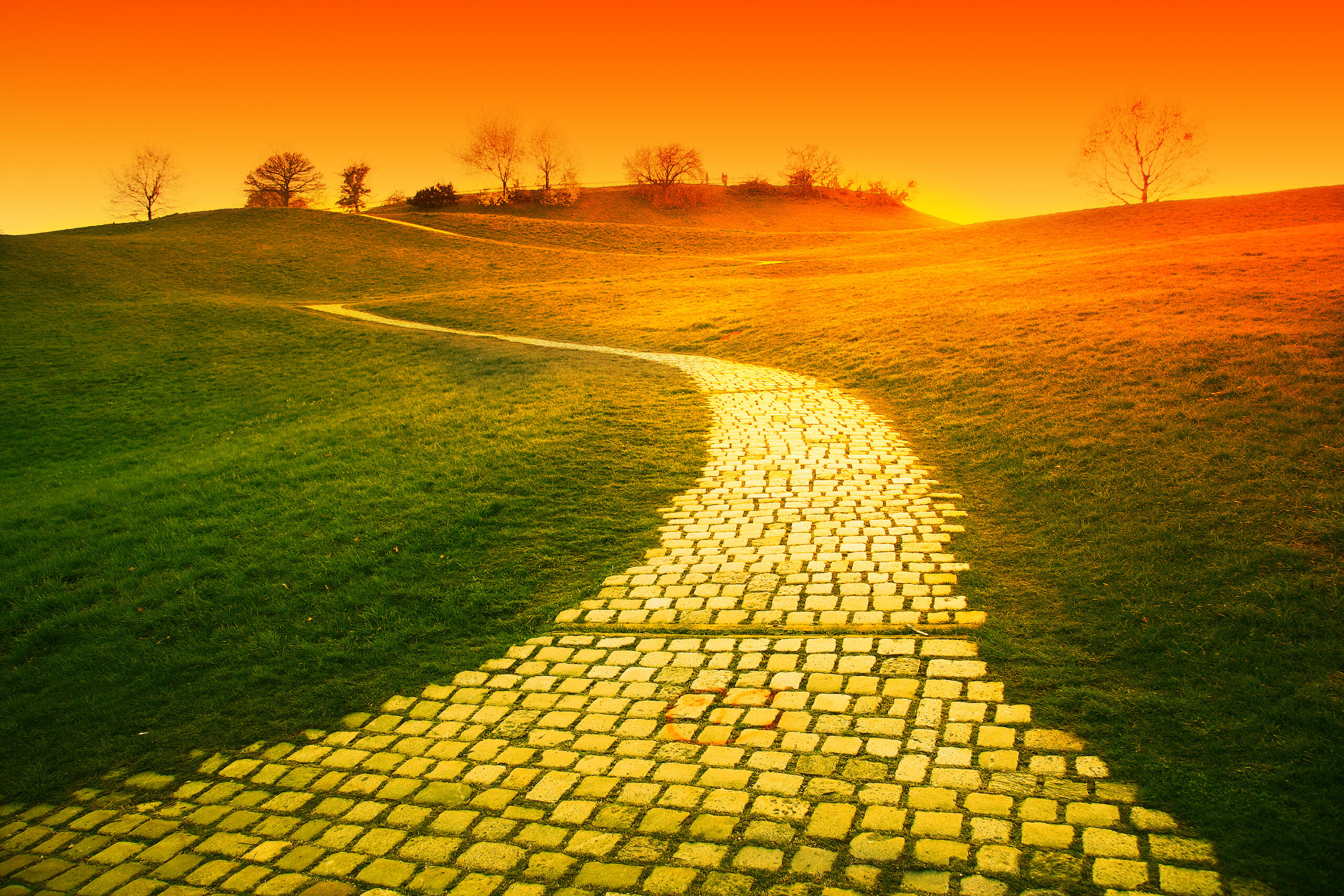 A violent tornado snatched Dorothy and Toto from the Kansas prairie, still in their farmhouse. They set down in Oz; the farmhouse landed on the Wicked Witch of the East, crushing her. The Good Witch of the North met Dorothy and told her she must take the yellow brick road and travel to the Emerald City. She must talk to the Wizard of Oz as only the Wizard had the power to return Dorothy to Kansas.

A violent tornado snatched Dorothy and Toto from the Kansas prairie, still in their farmhouse. They set down in Oz; the farmhouse landed on the Wicked Witch of the East, crushing her. The Good Witch of the North met Dorothy and told her she must take the yellow brick road and travel to the Emerald City. She must talk to the Wizard of Oz as only the Wizard had the power to return Dorothy to Kansas.

The Scarecrow, Tin Woodman and Cowardly Lion joined Dorothy and Toto on the yellow brick road. And that’s where we left them. The foursome met the Wizard. He agreed to help, on the condition they vanquish the Wicked Witch of the West, a notoriously fiendish character.

So the little band set off down the yellow brick road, unaware of the Wicked Witch’s fury. The Way To Emerald City

Disruptors and “creative” destroyers blew through American health care like EF5 tornadoes blow through the prairies, starting about a decade ago. The storms began with light winds, gusting through hospitals and the occasional doctor’s office. When the Health Information Technology for Economic and Clinical Health Act, HITECH, was passed in 2009, the winds picked up. Uncle Sam tossed out billions for electronic health records (EHRs) in the name of cost savings.

Most had no clinical experience. A college entrance physical was the last contact with health care for many. Yet all were convinced they had the answers. Could solve the crisis of American medicine.

Their hubris, the deluge of federal dollars and boundless faith in all things digital created a massive storm. Dazed survivors still stumble from the rubble.

The Winged Monkeys of Medicine

Electronic health records are the Winged Monkeys of Medicine. They’ve taken the stuffing out of physicians, dented trust patients had in providers and hijacked the pleasures of caregiving.

Physicians have written hundreds, perhaps thousands, of stories about their struggles with EHRs. Funny, sad, outraged, resigned. But no one captures the heartbreaking, almost sinister, effect that EHRs have on the doctor-patient relationship as well as Philip Allen Green.

Green practices emergency medicine in Walla Walla, Washington. He wrote a post for The Health Care Blog several months ago. He says in comments about the piece, “Please Choose One”:

It is fiction. I tried to capture exactly what it feels like as an ER doc…trying to take care of patients while constantly being disrupted by computers. I wrote it after a shift where 99% of my time was spent clicking through screens…entering orders, acknowledging warnings that have no relevance at all to what I do.

…I wrote it because the computer is all consuming now in the practice of medicine. So little time is left to sit face to face with the patients and treat them as a human being. The computer systems demand all our time and all our attention…Somehow, capturing and entering the data about the patient has replaced the actual patient themselves.

The brief story is written in first person. It describes a woman numb and blood-covered after an auto accident. And a computer demanding the clinician “Please choose one” from drop-down lists. The doctor tries to care for the patient despite growing aggravation with the computer, relentlessly beeping. Her condition deteriorates. The EHR insists on answers to irrelevant questions before the doc can get to useful screens.

Finally, he “gets it.” He chooses one. He unplugs the computer. The woman’s sobs are no longer muffled by the computer fan. He turns to her, watches her fear subside, and begins tweezing glass shards from her hair.

The vignette is fiction. The story is authentic. The disruptors, without clinical training, discounted the need for the human connection in care. If they even considered it at all. Trust With the Stuffing Pulled Out

Trust was once the bedrock of medicine. Never easy to earn, patient trust isn’t sought much anymore. The elements that build clinical trust have drained away. Long-term relationships. Available to patients in crisis. Undivided attention during visits. Now we have hospitalists, urgent care shops. And EHRs. The Winged Monkeys of Medicine

James Fallows wrote “Why Doctors Still Use Pen and Paper” last year for The Atlantic. Fallows interviewed David Blumenthal, one of the chief architects of the current health information technology (HIT) sprawl. Fallows asked Blumenthal whether [paper] medical records are as “incredibly backward” as they seem. Blumenthal responds, with surprising honesty, that providers face:

[S]ubstantial costs in setting up and using the systems. Until now, providers haven’t recovered those costs, either in payment…increased satisfaction, or in any other way.

Until now? Many still haven’t recouped the costs. Never will.

Fallows raises the eye contact problem. Blumenthal answers it’s a “transition issue.” He explains when the physician is looking at the screen, he or she can’t look at the patient. But it’s an “ergonomic problem.” It will improve as technology improves.

Or evolution gives human beings the ability to focus each eye separately. Like lizards.

American health care has been in rough shape for decades. Health care is expensive, often ineffective and beyond the reach of many. It needed reform.

The first concern was insuring the uninsured—and it’s still the most important issue. The Affordable Care Act (ACA) was an attempt to extend care to millions of uninsured people.

But many policymakers and politicians believed the cost of care—especially someone else’s care—was the most pressing issue. They were convinced the ACA was the road to financial ruin. That the costs of care needed drastic cutting before millions of new folks were insured. The politicians and cost cutters thought the path to the promised land of cheap care led first to spending billions of dollars on HIT.

Few physicians beyond academia and federal agencies were clamoring for total disruption in their lives. Patients weren’t eager for docs who ignored them, either.

The change wasn’t organic. It didn’t happen on a human scale or timeline. The digital tempest is bitterly resented by clinicians, more than other system changes. The Winged Monkeys swooped in, unbidden, grabbing the spirit of care.

Careful What You Wish For

Now EHRs blanket the land. Computers blink and whir in most exam rooms. At most bedsides. Doctors’ heads are bowed in supplication to the all-powerful digital deities. Clicking and pecking. Patients stare helplessly at monitor backs, bald spots or the wall.

And the disruptors admit all isn’t well. Dr. Blumenthal himself acknowledged, “…the threat of penalties is the only incentive (doctors) have to make it happen.” Blumenthal’s comment was prompted by a letter sent to Karen DeSalvo at the Department of Health and Human Services. DeSalvo is the National Coordinator for Health Information Technology.

The letter is nine single-spaced pages and was signed by 36 specialty societies including surgeons, neurologists and obstetricians. It outlines detailed recommendations about cleaning up the EHR mess, setting the tone with:

Among physicians there are documented challenges and growing frustration with the way EHRs are performing. Many physicians find these systems cumbersome, do not meet their workflow needs, decrease efficiency, and have limited, if any, interoperability. Most importantly, certified EHR technology (CEHRT) can present safety concerns for patients.

We met Accenture earlier on the yellow brick road. It’s a management advising and outsourcing outfit. Accenture paid for a six-country survey of 2619 docs. They were interested in physician attitudes toward EHRs in Australia, Brazil, England, Norway, Singapore and the US. Six hundred of the doctors were Americans.

Last month, Accenture published the full report. But the company also published an infographic highlighting the sentiments of the US docs. Not pretty:

• The three-year trend for believing EHRs lowered medical errors dropped from 72% to 64%.

• And the trend for improved patient outcomes slid from 58% believing EHRs were helpful in 2012 to 46% believing that now.

Those EHR features aren’t frills. Time with patients, patient outcomes and safety are fundamental to clinical practice. The Winged Monkeys have snatched them from under our noses.

Lost On The Yellow Brick Road

Co-pilot Andreas Lubitz committed suicide on March 24th, 2015 by plowing an Airbus A320-200 jet into the French Alps, killing 149 people as well as himself. Two weeks later, Patrick Smith, author and airline pilot wrote an opinion piece for the New York Times. In “Why Pilots Still Matter”. He wrote the article to dispel the widely held belief that planes fly themselves.

Smith says, “Indeed, the notion of the automatic airplane that ‘flies itself’ is perhaps the most stubborn myth in all of aviation.” He describes conditions and situations when the skills of pilots are all that stood between a planeload of people and eternity. He draws the analogy to medicine. Smith has in mind advances such as robotic surgery, but the analogy can encompass HIT.

Most of us don’t want to be in pilotless jets when engines conk out or weather turns foul. The disruptors let loose the Winged Monkeys. The creative destroyers tell us we soon won’t need doctors. Technology will take over.

Let’s hope they’re right. Because more and more docs aren’t waiting around to see the Emerald City. The Winged Monkeys are driving them right out of Oz.