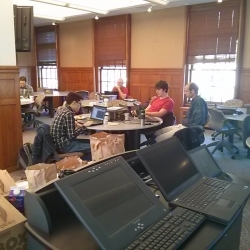 Hacking the Diagnosis of Rare Diseases Ed Fennell is a problem solver. After spending 35 years running a private consulting business, he’s turned his attention to something closer to his heart – solving the problems that are inherent in rare diseases.

Ed Fennell is a problem solver. After spending 35 years running a private consulting business, he’s turned his attention to something closer to his heart – solving the problems that are inherent in rare diseases. As the caregiver of two beautiful granddaughters with rare diseases (Haley has CDKL5 atypical rett syndrome and Emily lost 98% of her small intestine to short bowel syndrome) he is well aware of what the challenges are.

“The diagnostic process for rare disorders has been abandoned,” Fennell says. “Our experience was a textbook example of what happens to people.”

Haley had her first seizure at 6 weeks old but was not diagnosed until several years later. “No one had the courage to say, ‘Early onset symptoms are suggestive of a much more pervasive disorder. It’s not just epilepsy. We need to look further.’”

It wasn’t until they brought her to Boston Children’s Hospital for treatment that she was diagnosed, thanks to the alertness of someone who was participating in an academic research program and noticed the stereotypical signs.

Looking for Answers
“The problem with rare disorders isn’t lack of data,” Fennell notes. “It’s that these cases are one in ten million. When I walk into a medical facility I don’t expect anyone to know about Haley’s disorder.

” The worst thing that can happen to me is for someone to make believe they know what it is, and that happens over and over. I think one of the reasons I’ve been successful is that I’ve said to the doctors, ‘I don’t blame you for not knowing. How could you know? ‘”

One day, Fennell started thinking about the problem of improving diagnosis. “I ended up scouring the web for rare disease search engines. “ I came up with a handful the Phenomizer, OrphaNet, Find Zebra, SimulConsult. I did a test. I took out the pediatric neuro’s report from when Hayley was 4 months old, plugged the results into FindZebraand CDKL5 came up in the top 3, along with rett’s.”

The fact that it took 2 to 3 years to reach that diagnosis in Haley’s case speaks to what is lacking in the system, not in the doctors, according to Fennell. “We have a diagnostician shortage. There’s an 80 to 90 percent acknowledgment by physicians that they don’t know how to do it and they don’t get support.”

“No one wants to self-diagnose, but if there’s no one to pump your gas, what do you do? You get out of the car and pump your gas.”

A Rare Disease Hackathon
A lot of people talk about the challenge of diagnosing rare diseases, but Fennell decided to do something.

“I wanted a rare disease app designed which would provide an easy-to-use interface where I can enter symptoms. It would then give me possibilities for what my child has, link me to pub med articles, help me find doctors who practice in that area, and give me access to patient organizations.”

The way to achieve it, he decided, was to run a hackathon. Fennell posted his idea on the list-serve at Rensselaer Polytechnic’s Center for Open Source Software.

“Within twenty minutes I get an email and within 12 hours I was talking to a professor of open source software who also works for an engineering firm that has a significant investment in medical software. He said he wanted to make this part of his student’s experience. Would I mind?”

The first hackathon was staged in Albany on September 16 and 40 students showed up to work together, writing snippets of code to create an app to diagnose rare diseases. There have been two more events since.

“It’s organic,” Fennell explains. “It doesn’t have to be the same people. They set up a website where their work just keeps going. When you graduate, someone new takes it on. Pure open-source people don’t give prizes. They get involved. I had a charitable idea and they have the knowledge. We meet once a month, half students and half professors.”

Of course diagnosis is just one of the challenges people in this community face. Ed Fennell has a whole list of other rare disease initiatives he’s working on with Albany Medical College. But the thing about diagnosis is that it leads to hope and connection. “Most of us won’t have a treatment but we’ll have what we need which is a family.”