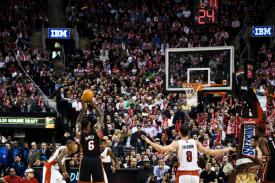 How to Manage Your Ortho Team Like the Miami Heat It’s NBA Finals time and the Miami Heat are making their fourth appearance in a row and angling for their third straight championship. Running a high-performance team is no easy feat, especially trying to win consistently year over year. Here are five strategies you can take from LeBron and the crew to apply to your own team’s performance:

It’s NBA Finals time and the Miami Heat are making their fourth appearance in a row and angling for their third straight championship. Running a high-performance team is no easy feat, especially trying to win consistently year over year. Here are five strategies you can take from LeBron and the crew to apply to your own team’s performance:

1. Hire the Right People – First of all, you’ve got to have the talent. The Heat definitely stacked the deck in their favor by recruiting the best of the best, but also made sure the supporting roles were covered with solid teammates. King James has even said, “In our sport, if you don’t have your teammates, you don’t have anything.” Then you have to build the relationships, between yourself and each of them, and between each other. Provide them with the vision of a positive future where everyone works together toward a shared goal.

2. Be Prepared to Handle Egos – If you think your orthopedic surgeons have egos, imagine dealing with the likes of LeBron James, Dwyane Wade and Chris Bosh. The only way to gain their respect is to prove yourself over time, but it’s important to hold these leaders accountable to their own performance standards. A great service line director knows when to push harder for something they believe in, and when to let the big names sort out problems amongst themselves. It’s a delicate balance.

3. Have a Strategy for Every Opponent – When you’re on top, every other competitor is looking for weaknesses and how they can gain the advantage to take you down. A good strategist recognizes their own weaknesses before they become apparent to others and works to make them better. You also have to know all the other teams in the league as well as you know your own. In this new era of destination healthcare, a competitor across the country may be just as large a threat as the one across the street.

4. Know Your Numbers & Review the Tape – I’m sure the Heat’s coach, Erik Spoelstra, could rattle off the statistics of every one of his players off the top of his head if you asked. And this is a guy who started in “The Dungeon” of the organization editing VHS tapes and slowly worked his way to the top. His tireless focus on analyzing past performance and working to improve it has probably been one of the keys to his success. Do you know your numbers? How can you “review the tape” of your program performance last year and identify the top opportunities for improvement?

5. Always Be Learning, Even From Outsiders – After the Heat made their first trip to the finals and lost the trophy, coach Spoelstra went on a “learning journey” and visited a bunch of college football teams around the country to learn new strategies for his offense. He came back with a new fast-paced, flexible offense that defied traditional basketball playbooks and won the championship. By leveraging best practices from market leaders in other outside groups, you too can gain leverage to move past the competition and achieve a leading position. Are there strategies you could be leveraging from other industries like manufacturing, hospitality, or the consumer world?

Orthopedic service line directors are faced with managing large teams with all different kinds of personalities. They’re also faced with huge disruptive changes in the healthcare industry adapting to new models of care. Whether you love the Heat or the Spurs or hate them both, keep your eyes open for lessons that can be learned from teams that know how to win.