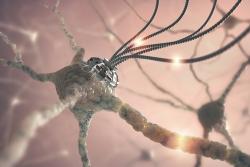 Scope of Nanotechnology in Drug Delivery: Current State of Application and Future Potential The use of nanotechnology for developing efficient drug delivery systems has remained a topic of interest for many years now. Researchers have been coming up with novel and undeniably practical modes of application of nanotechnology in the recent past.

The use of nanotechnology for developing efficient drug delivery systems has remained a topic of interest for many years now. Researchers have been coming up with novel and undeniably practical modes of application of nanotechnology in the recent past.

A team of researchers from Israel’s Tel Aviv University, Jerusalem’s Hebrew University, and England’s Newcastle University has developed a way through which the potential loss of eyesight due to retinal degeneration can be avoided through nanotechnology.

The tangible manifestation of this concept – the prosthetic retina – is a wireless, flexible, and light-sensitive nanofilm developed by combining carbon nanotubes and semiconductor nanorods. This film can potentially replace a damaged retina and help in restoring eyesight.

This is just one of the many examples of how nanotechnology has gone beyond the realm of conventional applications and into unprecedented ones including experimental nanomedicines for currently incurable diseases such as Alzheimer’s.

The countless benefits promised by nanoscience and nanotechnology in making medicines more efficacious have been endlessly pronounced since the inception of the concept. Nevertheless, the field and its applications in drug delivery are still in a nascent phase and the infinite possibilities it offers remains to be studied.

Before we delve into the revolutionary ideas that have emerged from global research activities in the application of nanotechnology in drug delivery, let us take a look at what the field aims to achieve and how it intends to do it.

Matter possesses different properties in its nano-sized version (nearly 1,000-100,000 times smaller in dimension than a typical human hair) than in general cases. Scientifically, nanotechnology exploits the significant improvement in biological, chemical, and physical properties exhibited by substances when they are in their nano-sized states. The field attempts to describe and develop materials, systems, and devices with the ability to control these properties at the nanoscale.

Here are a few highlights that give testament to the fact that nanotechnology can be the true enabler of highly efficient drug delivery systems:

Nanoparticles: Nanoparticles are currently the most studied branch of nanotechnology. Scientists at Rice University, Texas have developed small, uniform nanospheres of cerium oxide – a highly popular industrial antioxidant – which have the capability of treating cardiac arrest, traumatic brain injuries, and even Alzheimer’s.

At the time of a traumatic injury, for instance, blood contains increased levels of reactive oxygen species (ROS), which deprive cells of their oxygen and result in significant damage to their structures. By removing these free radicals from the bloodstream, cerium oxide nanoparticles can help cells survive, thus preventing further damage.

Magnetic Nanoparticles: Researchers from the University of Maryland (UMD) and Weinberg Medical Physics LLC (WMP) of Bethesda have developed magnetic nanoparticles that can be loaded with drugs or genes and directed towards deep targets in the body by using an external electromagnet.

Self-healing and Injectable Nanomedicines: A team of researchers from the Massachusetts Institute of Technology and Texas A&M University have developed a variety of injectable nanomaterial that could accentuate the process of blood clotting and prevent blood loss in a near-fatal accident. The material is a form of biodegradable gelatin encapsulated by nano-discs that help in coagulation of blood.

Even though the biomaterial is still being tested, the team believes that it could eventually be prefilled into syringes that users can inject on their own, giving them sufficient time to get to a hospital for treatment.

Transparency Market Research states that the global nanomedicine market was estimated to be worth US$78 billion in 2012. The report also indicates that this market is likely to expand at a compound annual growth rate (CAGR) of 12.3% between 2013 and 2019 to reach a value of approximately US$177 billion by 2019.

The market is largely driven by massive investments from public and private financial bodies to fund research and development activities.

A major concern nanotechnology faces today is whether or not it can be feasibly applied in the process of drug delivery. While the possibilities of nanomedicine are manifold, are there any medicines or drugs in the market that use even one of the aforementioned materials?

The answer is yes, but not as many as one would have hoped at the moment.

A majority of the nanomedicines are not commercially available for consumers. Instead, they are used for research activities focused on drug discovery, better imaging techniques, and as prescription drugs to treat a particular medical condition. Many nanomedicines for oncology are still in their clinical trial stages and many new drugs are in the pipeline.

The handful of drugs and technologies commercially available for end-use include:

Nanotechnology is not a field that can be restrained or limited to a few applications. Often referred to as general-purpose technology, nanotechnology, in its most advanced, form has the potential to impact every industry at all verticals.

What has been covered in this article is merely a drop in the proverbial ocean of potential nanotechnology applications. There is so much more that can be done to fully grasp the vast potential of this field. Judging from the pace of research in nanotechnology, the day does not seem far when even diseases such as HIV/AIDS and cancer may find a suitable cure.