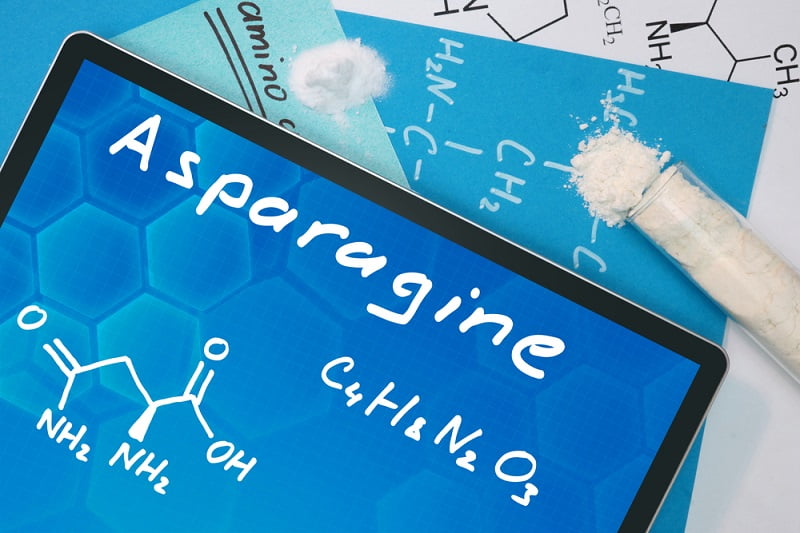 Cancer research: high levels of asparagine could drive the spread of breast cancer to other organs

A new study published in the journal Nature may have found a way to halt the spread of breast cancer to other organs by reducing the availability of asparagine, an amino-acid found in asparagus and many other foods. The study, funded by the Cancer Research UK Cambridge Institute and conducted by cancer specialists from the UK, US and Canada, investigated the effects of blocking asparagine in mice with severe forms of breast cancer and came to some promising leads: when suppressing asparagine with a drug called L-asparaginase, the ability of cancerous cells in breast tissues to migrate to other organs was reduced. A similar effect was also observed by cutting down the amount of asparagine in the rodent diets. The effects of asparagine-blocking drugs have not yet been investigated in human trials, but researchers are optimistic that these new findings will facilitate the development of better cancer treatments and targeted “cancer cocktails” in human patients.

Asparagine is a non-essential amino-acid and a building block for proteins naturally found in the human body, but also in common meats, dairy products, fruits and vegetables, most notably asparagus. This new research shows that in mice, high levels of asparagine favor breast cancer metastasis by making them spread more easily through the bloodstream to surrounding organs. Experts then compared these findings to records of high asparagine breast, kidneys, head and neck cancers in humans and found that they were more likely to spread. This further consolidates the theory that many cancer types are dependent to one molecule and blocking the molecule affects the ability of cancerous cells to spread.

Because most patients do not die from the initial tumor, but from cancer metastases, this study could play an important role in understanding and stopping the spread of cancer cells to other sites. Scientists don’t know exactly how asparagine manages to do that, but the study reveals how one molecule radically affects the behavior and form of cancer cells and how the patient’s diet influences breast cancer outlook. The drug used in the tests, L-asparaginase, is currently used to treat acute lymphoblastic leukaemia, a type of cancer dependent on asparagine. It interferes with the transformation of cancer cells, preventing them from becoming similar to stem cells and growing into healthy cells.

So does this study mean that humans should stop eating asparagus and other asparagine-rich foods? Not really, and we shouldn’t jump to conclusions. Breast cancer patients should not make radical changes to their diets without consulting their doctor first, because they could do more harm than good, especially if they are undergoing chemotherapy. This therapy, coupled with aggressive cancer medication, can lower the body’s resistance, so it’s essential to have a rich and balanced diet. Lead researcher Professor Greg Hannon says that is a multi-level study and these findings also need to be analyzed in human trials. Asparagine is one of most ubiquitous amino-acid and apart from asparagus it can be found in many other foods, including chicken, beef, potatoes and seeds. Therefore, attempting to remove it from one’s diet is almost impossible. DIY diets are not the answer, scientists suggest, and more research is needed to discover the most efficient way of preventing the spread of cancerous cells. At present, there is no clear evidence to suggest that asparagine causes metastases, just how there is no solid evidence to believe that chocolate or breast augmentation procedures cause breast cancer. Humans are more genetically complex than mice and the extent to which asparagine affects us needs to be further investigated.

Another important take-home lesson from this study is that asparagine-blocking drugs did not have any effect on the initial tumor, only on the way its cells spread to other organs. As far as preventing cancerous tumors from appearing in their first place and treating their initial site, immunotherapy is a more promising lead that cancer researchers are pursuing.

Although the research following this study is still in early stages, scientists are optimistic that it will open a pathway towards more powerful customized cancer treatments. For example, breast cancer patients could be administered asparagine-blocking drugs in addition to their existing treatments in order to reduce the risk of cancer recurrence in the future.