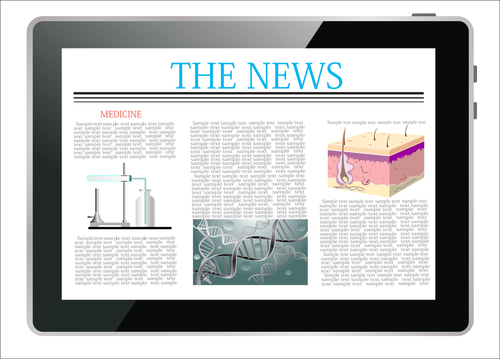 How do you turn the flood of news and information into something useful? That’s what we try to do at Delve, and for our Wonk Lens series we ask smart people how they manage it. You can also check out the curated news channel we built based on Dr. Kraft’s interests here, and find more expert channels in the smart, social news reader we built for health professionals like you.

If you are interested in the future of medicine—especially if you are interested in the future from the perspective of a wildly creative gadget and airplane-obsessed doctor—you’re probably paying attention to Daniel Kraft. Kraft is a medical doctor, a medical-device inventor, and a professor at the school of futurism in Silicon Valley: Singularity University. And somehow he finds time to serve as a major and flight surgeon for an F-16 jet fighter squadron in the California Air National Guard. Kraft’s research has focused on immunology, stem cells, health IT, and personalized medicine. His work has been published in the top scientific journals Nature and Science.

How do you get your news in the morning?

I just close my eyes and let the Universe deliver it directly to my brain. No, let’s see… I look on Twitter, Google News – I’ve customized it a little to get health-related things – the New York Times, sometimes I’ll check Facebook – there are a couple of groups I’m part of there with some good stuff. I get a few sort of spam news summaries in my email; some are pretty well curated and I’ll actually read: GenomeWeb News, Rock Health. I get the contents of some journals, like the New England Journal of Medicine via email and I may or may not read those articles depending on my time and whether they look interesting. There are a couple blogs I check that have a fair amount of good content: Medgadget and Singularity Hub. And I’m a NPR junkie. I’ll always listen to the top of the news, and have it on while I’m driving. It’s not an exact course, kind of a mix of things. Sometimes my parents email me stories.

Sounds like you’ve crowdsourced your news curation in a way.

Yeah, definitely to a certain extent.

Do you still get any physical periodicals?

I get Wired, Time, some medical journals; I have to admit they all stack up. I get the New York Times Sunday Edition, I used to get it every day but it really piled up. I just couldn’t get through it. I wish I could push everything to the iPad, but with Wired, for instance, I like the print edition so much better.

Are there other tools you use to filter and remember important stories?

These groups I’m part of on Facebook – with just a lot of like-minded people sharing things – often turn up interesting stories. You know Reese Jones? He’s a trustee at Singularity University and he just posts stories incessantly, but really good stuff, so I have it set to notify me. I’ll tweet out stories that I want to remember, as a way of tagging them, and then favorite stories that look interesting that I don’t have time to read right then, sort of a poor-man’s way of curating. I know there’s ways of clipping stories with Evernote but I don’t end up doing that.

Can you think of the last story that was genuinely useful to you?

Well, I didn’t upgrade my iOS on my iPhone because I like my Google maps. I think I must have seen something about the Washington Monument in Apple Maps being ten miles off or something on Facebook, and then the tidal wave of news about that came rushing in.

Do you have any guilty pleasures when it comes to news?

It used to be CNN, but I gave up cable. I’ll still end up on the CNN website every once and a while—I’ll see a crazy story about a woman who was decapitated or something and it will be arguably legitimate because there’s a medical aspect to the story. But then from there, if I’m not careful I just go down the rabbit hole of trashy stories.

It takes something like 20 years between the time when researchers conclude that clinical care should change some practice and the time when that practice is widely adopted. Do you think there’s a way that journalism—thinking of it in the general sense as a news delivery system—could help with that?

There’s one related problem that has to do with hype: People read about stem-cell research and they wanted the cures the next day, so perhaps journalists could do a better job of communicating the scientific processes. On this point that you’re talking about, a good doctor may have only 4 to 5 hours a month to read journals—that’s clearly not enough to get through them all. There are some websites that try to filter and narrow journal articles down, and doctors go to conferences for continuing medical education, but there’s still a problem with getting the new information to all of them. When I talk about the future of electronic medical records I talk about how information could be pushed to doctors using artificial intelligence while they are trying to make a diagnosis. So if you have a 35 year-old woman with Lyme’s disease, and she’s pregnant, and there’s new information that’s come out about that then you would get an alert, and you could link to the journal article right there. It almost needs to be a heads up display like we have in the fighter pilot world.