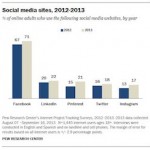 The research folks at Pew Internet provide an insightful report about the multi-layered patterns of social networking by online adults. Marketing and communications professionals can determine the most engaging social media opportunities.

The research folks at Pew Internet provide an insightful report about the multi-layered patterns of social networking by online adults. Marketing and communications professionals can determine the most engaging social media opportunities.

Referring to Facebook as “dominant” is almost an understatement. Among online adults using social media (SM) sites, the Pew Research Center reports that “73 percent use a social networking site of some kind,” putting it ahead of others by a huge margin.

But as big as it is, Facebook—and effective social media in general—is not a singular solution. “A striking number of users are now diversifying onto other platforms. Some 42 percent of online adults now use multiple social networking sites.” [Pew Internet Social Media Update 2013]

Sophisticated healthcare and hospital marketing plans recognize the value of leveraging multiple social media platforms and building a SM matrix to connect tailored messages with audience segments. The factors that shape the media matrix are demographics, multiple site selection and frequency of use data. A core objective of marketing with social media tools is to carry your message in a way that not only communicates, but also engages a specific audience. “Facebook, Instagram and Twitter users stand out as having the highest rates of engagement,” according to Pew. The nature of these three sites is more direct, personal and timely/immediate.

These characteristics produce an involvement or  “stickiness”—more so than Pinterest or LinkedIn—where users are engaged in a continuing dialogue of sorts and are motivated to visit repeatedly. “Fully 63 percent of Facebook users report going on the site at least daily (with 40 percent logging on multiple times per day), giving it not only the highest overall percentage of users, but also the most engaged.”