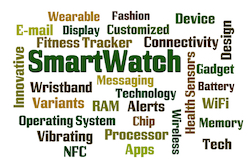 Wearable Tech, CES2015, and the Quantified Self of Healthcare It’s not the gadgetry, it’s the data.

The annual International Consumer Electronics Show—billed as the global stage for innovation—is always a big deal. The showcase has three main convention venues along the famed Las Vegas strip, several thousand exhibitors, and well over 150,000 attendees.

It’s not the gadgetry, it’s the data.

The annual International Consumer Electronics Show—billed as the global stage for innovation—is always a big deal. The showcase has three main convention venues along the famed Las Vegas strip, several thousand exhibitors, and well over 150,000 attendees.

Scanning the innovative horizon for healthcare delivery and medical marketing, CES2015 was a digital bellwether for wearable technology and other patient-based (consumer) devices.

By one tally the CES show had about 300 health and biotech exhibitors, an increase of 35 percent over the 2014 show. Many devices are broadly characterized as wearable, where self-tracking health data originates with the patient.

To illustrate, Yahoo! News reported on wearable bracelets that “measure body fat and robots that coach children through chemotherapy.” And the All Tech Considered website wrote about:

But fascinating, coming-of-age gadgetry is only part of the story. The bigger picture is how wearables and digital tools are likely to change the doctor-patient relationship. In a Forbes overview report, The Five Most Disruptive Innovations at CES 2015, they observed how “information itself is fast becoming the critical asset in digital businesses.”

This is particularly appropriate in the Health and Fitness sector where: “There’s been an explosion since last year of new vendors and new applications that collect, report, and respond to information from the user’s own body, a trend that is sometimes referred to as ‘the quantified self.’”

And, as the digital data from these and other disruptive health and wellness devices eventually converge, “the result will be nothing short of a revolution in health care in the broadest sense, with patients shifting from passive to active participants in diagnosis, treatment, and preventive care,” predicts Forbes.

“Every business is now a digital business…”

Digital devices, data and wearable tech continue to transform healthcare delivery and redefine the doctor-patient relationship. And, as one CES2015 educational session proposes, “Tech is providing physicians and hospitals with access to new diagnostics tools, 360-view of their patients and powerful analytics to amplify their expertise and fuel a new era of medicine.”

Lonnie Hirsch
Director, Hospital Division at Healthcare Success Strategies
Lonnie has consulted for over 2,000 health care clients during his 20-year career, and co-founded Healthcare Success Strategies with Stewart Gandolf. He writes for many healthcare publications, and also has spoken at hundreds of venues nationally. Today, Lonnie leads our hospital division.
TwitterGoogle+LinkedIn

The post Wearable Tech, CES2015, and the Quantified Self of Healthcare appeared first on Healthcare Success Strategies.